UFI welcomes Author Rachel A. Marks. Thanks for Joining us!!


What can you tell my readers about yourself that they might not know from looking on your bio or reading in another interview? Weeellll.....something most of my readers don't know is that I got kicked out of a private high school three weeks before my graduation for being a witch. :)

What do you enjoy doing on your down time? In my down time I'm a total nerd and I, um, write. LOL I may like my job a little too much.

What is your Favorite part of writing? When an idea sparks! I love that buzz I get inside that's like a switch flipping inside me. And I can see the character so clearly. It's almost as if they tapped me on the shoulder and I turned, and there they were.

Do you have any certain routines you must follow as you write? I'm ever-changing in where I sit or how I work. Mainly, I need my coffee and my apple.

What are some of your Favorite books or Authors in the Urban Fantasy/ Paranormal Genres? For UF and Paranormal, I usually read adult, with some YA peppered in there sporadically. I am a huge fan of Kelley Armstrong and Kresley Cole. I also like Patricia Briggs' Mercy Thompson books. And Melissa F. Olson is amazing! For YA, I'd say my favorite has got to be the Hex Hall series by Rachel Hawkins.

How would you pitch DARKNESS BRUTAL to someone who has not heard of it before?

This is a tough one! It's funny, but no matter how long you're a writer, pitching a book you know inside and out is nearly impossible.

Can you tell us a little bit about the world that The Dark Cycle Series is set in?

The series is set in the streets of LA, and it was really fun researching some local ghost stories to play up and toy with. And having grown up around here, it was extra fun! The bummer is I didn't get to use all the ones I wanted to, like the abandoned Dairy Factory, called Scary Dairy, or the park bench in Griffith Park that's haunted by a pair of lovers. But I really enjoyed getting to paint the diverse and gritty LA that I know for readers to see.

Do you have a favorite scene in The Dark Cycle series?

I have several, but I think my absolute favorite will always be the final scene in DARKNESS SAVAGE when all the strings come together, and we see what life is going to be like for them all. In the end it was a very emotional scene to write, and I really hope the readers feel like the story was what they wanted it to be.

My favorite character to write was Jax, one of the teens in the house. He was just so snarky and impossible. And the toughest one to write was most definitely Finger, another housemate. He says absolutely nothing for three books but he's very important to the story as a whole, and he still has feelings and abilities that I had to portray.

Right now I'm working on a YA fantasy tentatively titled, THE RAVEN CALLS. It's gritty (of course) and hopefully full of mystery. It's about a boy, a goddess, and a silver raven: Dickens' Great Expectations meets Hobb's The Farseer Trilogy. I'm really really enjoying writing it and trying to make all the layers of story work together. It's a challenge, but a good one.
__________________________________

Rachel A. Marks is an award-winning author and professional artist, a SoCal girl, cancer survivor, a surfer and dirt-bike rider, chocolate lover and keeper of faerie secrets. She was voted: Most Likely to Survive the Zombie Apocalypse, but hopes she'll never have to test the theory. Her debut series The Dark Cycle, described as Dickens' Oliver Twist meets TV's Supernatural, is now out through Skyscape, beginning with DARKNESS BRUTAL. 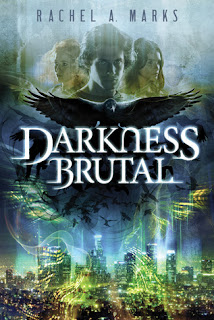 
Aidan O’Linn’s childhood ended the night he saw a demon kill his mother and mark his sister, Ava, with Darkness. Since then, every three years the demons have returned to try to claim her. Living in the gritty, forgotten corners of Los Angeles, Aidan has managed to protect his sister, but he knows that even his powers to fight demons and speak dead languages won’t keep her safe for much longer.

In desperation, Aidan seeks out the help of Sid, the enigmatic leader of a group of teens who run LA Paranormal, an Internet reality show that fights demons and ghosts. In their company, Aidan believes he’s finally found a haven for Ava. But when he meets Kara, a broken girl who can spin a hypnotic web of passionate energy, he awakens powers he didn’t know he had―and unleashes a new era of war between the forces of Light and the forces of Darkness.

With the fate of humanity in his hands, can Aidan keep the Darkness at bay and accept his brilliant, terrifying destiny?

Listen to an Audio Sample


I let the pulse of the music coat me and mute my surroundings. A mass of people crowd the dance floor of the club, and I sit on an abandoned couch in the corner. The lights beat at the air in blues and greens, and bodies twist and merge to the thunder. I lean back, close my eyes, and try to get lost in it, the smells and sounds of people and their collective high.
Something moves next to me. I look over to find a girl sprawled on the seat beside me, trying to catch her breath. She’s not dressed in the usual club gear, more like a girl who got lost on her way to a beach party: Hurley T-shirt, jean skirt, and red Converse. Her cheeks are flushed pink; her throat and forehead glitter with sweat. She glances at me like she didn’t know I was there. She licks her upper lip, her eyes not leaving mine. Then she says something I can’t hear.
I point to my ear and shake my head.
She smiles and laughs, lighting up the space around her. She rests her hand on my arm, like we’re friends and I just told her the most hilarious joke, and then she gets up and disappears into the mass of bodies again.
My arm tingles, my body reacting to the moment of contact in a sudden and disconcerting way. I think I’ve had my fill of watching people indulge their baser instincts. I need to get out of here.
The beat of the music speeds up, vibrating faster as I move through the crowd. I try not to touch anyone, which is nearly impossible. All the emotions and appetites are overwhelming, as if the rising rhythm of the music makes their yearnings rise, too. Lust buzzes in the air. A hunger stirs in me, a gaping hole, needing to be filled. With touch.
The touch of female fingers. A hand on my arm, taking my wrist, pulling me into the fray, into the pressing bodies. And I don’t try to escape. I let her take me.
Because I’m tired.
Because I’m a dumbass.
A girl moves in front of me—not the Hurley girl, not the one I was hoping for. She presses closer, so close I can almost taste the salty perspiration on her skin. She has thin, birdlike shoulders, a swan neck, a heart-shaped face, and black hair, long and tangled, turning blue and green with the light. Her hands slide up my chest. She wraps her arms around my neck and tilts her head to look up at me.
Her lips are full and painted dark purple. There’s a dimple in her left cheek that gets deeper with her growing smile. And her eyes . . .
Fog fills my head for a second, interrupting my thoughts.
“Hi,” she mouths, calling attention to her lips again.
And then she’s rising up on her toes, pulling me down to her, twisting her fingers in my hair, her lips smashing against mine.
My body buzzes from her touch, and my hands react, drawing her into me. I drink her in. She tastes like the air around me, hunger and urgency, and—
Green apple Jolly Ranchers?
I grip her sides, her ribs so delicate beneath my fingers. The sweet tang of her teases me, the hunger becoming a monster deep inside. I have to press her closer, tighter, try to feed it, as I feel the fire of her need link with mine.
She pulls back a little and looks at me with wide eyes, like she’s shocked. That’s when I see the mark, a glowing, blue-inked line of what looks like Chinese symbols, trailing down the nape of her neck to her shoulder blade. Symbols that I’m suddenly sure mean: touch this girl at your own risk.
It’s the only thing I see for a second: Beware. Beware.
Until her energy reaches for me, wispy tendrils of blue light wrapping their way around my wrists and snaking up my chest.
I jerk away, into the guy behind me, stepping on his girlfriend’s toes. I get shoved— thankfully farther from the hypnotic girl—through a space in the crowd, saying a hundred excuse-me’s even though I know no one can hear them. I find my way out of the press of bodies to the edge of the room again where it’s safe.
It’s time to leave. I should’ve left an hour ago. 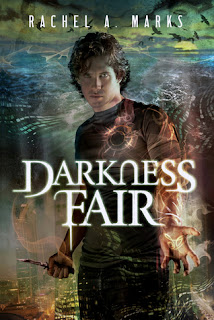 
Against the backdrop of an ancient battle between the forces of Light and the forces of Darkness, Aidan struggles to control the newly awakened powers that seem to be his only hope for rescuing Ava, his little sister, trapped somewhere beyond the Veil. As he gravitates to Kara, the dangerously unstable girl who helped him realize his abilities, a terrible mistake of fate is revealed that points him back toward Rebecca, whose role is becoming more critical to the battle. And no matter what his heart wants, it might be too late to stop the pieces already in motion.

Without knowing the sacrifices that will be required of them, Aidan and his motley crew of friends—each with their own role to play—must face the demon threat head-on. They’re the only ones keeping the growing army of Darkness at bay, and if they fail, the future of humanity could be lost.

Listen to an Audio Sample