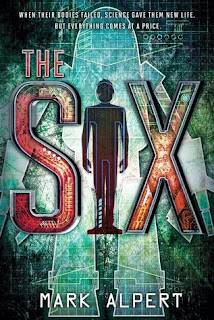 
Adam’s muscular dystrophy has taken his motility, his friends, and in a few short years, it will take his life. He takes solace in playing video games he’s programmed to reflect the life that he used to have. Virtual reality is the one realm where he can be the hero, and it’s where he chooses to spend his time, until an entity called Sigma tries to kill him.

A dangerously advanced artificial intelligence program created by Adam’s computer-genius father, Sigma has escaped its cyber prison and is threatening global destruction and domination. But Adam’s father has a plan. He will stop Sigma by using the technology he developed to digitally preserve the mind of his dying son.

Adam’s consciousness is uploaded into the body of a weaponized robot, along with a group of five other gifted teens who are terminally ill. Together, they must learn how to manipulate their new mechanical forms and prepare for combat before Sigma destroys humanity. Adam can finally play the hero for real, but will his new body be worth the sacrifice of his human existence?

This innovative and thought-provoking young adult debut, from the critically acclaimed author of adult thrillers Final Theory and The Omega Theory, questions what it means to be human and whether we are destined to be defined by our physical bodies or our intellect.

“Adam is an unusual hero—and he faces a frightening question: Computers can’t kill—CAN they? I’m still shaken by the answer. Will the near-future really be this terrifying?” —R.L. Stine, bestselling author of the Goosebumps and Fear Street series

“An exciting action story chock-full of characters you’ll love. The Six is full of big ideas, big questions, real science, and things that will make you think and wonder and lie awake late at night.” —Michael Grant, New York Times bestselling author of the Gone series

“The Six are introduced as terminally-ill teens, but there’s plenty of high-speed action in which they engage. Their physical disabilities and limitations through disease are forgotten as the teens’ hearts, minds, and personalities shine through...questions of principle, power, and possibility keep this look at our modern, hardwired existence fresh and fascinating.” STARRED Booklist

“Do not just read The Six; make your friends read it too.” –VOYA Magazine


Shannon rears back in her seat as if she’s been slapped. “And where are you going to store the copies of our brains?” Her voice is furious. “In a supercomputer? A big electronic prison?”
Dad doesn’t take offense. He answers her calmly. “The scanning process converts human intelligence to a digital form, allowing it to run on any neuromorphic computer that has enough memory and processing power. But in the initial stage right after the transfer, we believe it’s important to connect the intelligence to a machine that can move around and sense the outside world. A human intelligence is accustomed to controlling a body, so if we want to preserve its sanity, we’d better give it something to control. Here, let me show you.”
He puts the vial of nanoprobes back in his pocket and pulls out something else, a small remote--control device. He points it at the doorway beside the stage, and a moment later I hear a loud clanking. The noise startles the soldiers standing by the doorway. They step backward, flattening themselves against the wall. Then a seven--foot--tall robot emerges from the doorway and brushes past them.
The robot strides across the stage. It has two arms and two legs, but otherwise it isn’t very humanlike. It has no head or neck. Its torso is shaped like a giant bullet, with the rounded end on top. Its legs angle downward from the base of its torso and rest on oval steel--plate footpads that clang against the floor.
The machine marches briskly past the podium and stops in front of my dad, who presses a button on his remote control. This command extends the robot’s arms, which telescope to a full length of six feet. They look like multi--jointed tentacles. The machine’s hands, though, resemble human hands, with dexterous mechanical fingers and thumbs.
Dad presses another button, and the robot’s rounded top starts to turn like a turret. “The cameras and acoustic sensors are up here,” Dad says, pointing at the top end. “But the neuromorphic electronics are deep inside the torso, encased in armor plating. These robots were originally designed for the war in Afghanistan, so they’re pretty sturdy.” He raps his knuckles against the torso. “All in all, it’s an excellent platform for a newly transferred intelligence, but really it’s just the beginning. The whole point of the Pioneer Project is to bridge the gap between man and machine, and that means the human intelligences must explore their new environment. The Pioneers will have to learn how to use their new capabilities, and that includes transferring their intelligences from one machine to another.”
His voice grows louder again, full of enthusiasm. “Once the Pioneers have mastered these tasks, our hope is that they’ll be able to establish a connection with Sigma. If all goes well, they’ll start communicating with the AI before it launches any of the Russian missiles. And then the toughest challenge will begin. At the same time that the humans are learning how to be machines, they’ll have to teach Sigma how to be human.”

Mark Alpert is a former editor at Scientific American, and the author of several adult thrillers. He’s been praised by Douglas Preston as the “heir to Michael Crichton.” Visit Mark online at markalpert.com.