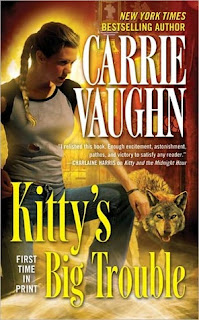 
Kitty Norville is back and in more trouble than ever.  Her recent run-in with werewolves traumatized by the horrors of war has made her start wondering how long the US government might have been covertly using werewolves in combat. Have any famous names in our own history might have actually been supernatural?  She's got suspicions about William Tecumseh Sherman.  Then an interview with the right vampire puts her on the trail of Wyatt Earp, vampire hunter.

But her investigations lead her to a clue about enigmatic vampire Roman and the mysterious Long Game played by vampires through the millennia.  That, plus a call for help from a powerful vampire ally in San Francisco, suddenly puts Kitty and her friends on the supernatural chessboard, pieces in dangerously active play.  And Kitty Norville is never content to be a pawn. . . .

After reading Eight Kitty Norville books I really thought I would have gotten to know all there is about Kitty but she still manages to entertain me and surprise me at every turn with her humor, strength and devotion to her pack.  One of the best things about the series in my opinion is that the series has a long running plot but it is also its own book that has its own events that are resolved by the end of each book. Does that make sense? I like not having to wait until the next book to see how Kitty's most recent adventure ends, yet i know that there will be another action packed adventure coming to my bookshelf soon. I'm sure you have seen the same complaint from many other reviewers I know i have but I'm having a hard time with Cormac's "possession" I just don't get it. I don't get how its going to play out to benefit everyone and I'm just kinda all around blah about it. Hopefully Carrie has some great big plans for it and I will end up being pleasantly surprised at the development.

The romance is very thin In KITTY'S BIG TROUBLE but I really do love Kitty and Ben. I love how Carrie describes there interactions with each other and I love seeing them work as a team. I'm also still hoping that Kitty will be the one werewolf that defies science and gets pregnant with little wolf babies =).  KITTY'S BIG TROUBLE is jam packed with action and trouble almost from the beginning. I was kinda hoping for some bigger pack action but the "pack of three" (Kitty, Ben and Cormac) go on the road to help out Anastasia in San Fransisco. Kitty goes through a lot as usual, ends up meeting new players in the game as well as fighting Roman, and gets more responsibilities piled on her shoulders. She find out that the supernatural world is even bigger then she thought it was and has a hard time swallowing all the information down. The last chapter of the book makes it clear that Kitty will be traveling again but overseas this time so I'm excited to see what will happen next. Carrie has defiantly continued to keep me interested in reading about her characters and stories and I don't see myself stopping anytime soon