Paige Tyler’s latest X-Ops title, Her Fierce Warrior, comes out this March! To celebrate the release, Paige Tyler stopped by to share with us a fun factoid about one of her X-Ops agents.

X-Ops Factoid: Ivy Halliwell (Her Perfect Mate) has a younger sister who is also a feline shifter. Ivy doesn’t want her “baby” sister in the DCO, but that hasn’t worked out too well. 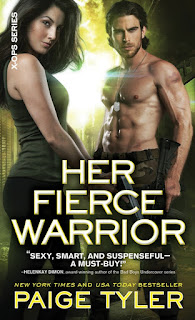 The woman tensed. As anger and fear ricocheted across her face, her eyes changed from red to green to brown in a dizzying display like nothing he’d ever seen.

Every instinct in Angelo’s body screamed at him to lunge for his weapon. Instead he set his feet for impact, blocking her slashing claws. Unbelievably, after a few moments of struggling, she went still, all the fight gone…

Minka isn’t sure she should trust the sexy Special Forces soldier who found her. Subjected to horrors, on the run from scientists set on locking her in a cage, Minka is terrified of the monster she’s becoming…and somehow, Angelo is the only one who can calm the beast inside her and make her feel safe.

But can she trust the way he makes her feel when she’s not even sure she can trust herself?


“So what did you and Landon do this afternoon?” Minka asked, her soft voice dragging him back to the present.
Angelo looked up to see that Minka had already polished off two fajitas. Damn, the girl could eat. “Landon gave me a tour of the DCO complex. I did some target shooting and blew up a few things. He even let me play with the expensive surveillance toys. I swear, it felt more like a recruiting pitch to get me to work there than anything.”
Minka’s eyes flashed green, her full lips curving slightly. Damn, why the hell had he said it like that? Now she probably thought he was going to come work for the DCO. Even if he wanted to, he couldn’t, not after just reenlisting for another five years. The army wasn’t the kind of job where you could walk into the boss’s office and say, “I quit.”
Thinking it would be a good idea to steer the conversation back to safer ground, he reached for another fajita and asked Minka a question instead. “What do you think you’ll work on next with Ivy and Tanner? You going to practice with the claws for a while or move on to something else?”
Angelo felt a little crappy about changing the subject, but if Minka noticed, she didn’t seem to mind. And it wasn’t like he had to fake interest in what she was saying. Anything that involved Minka was important to him. Besides, he didn’t know much about shifters or hybrids, so the whole thing was pretty damn fascinating.
“What do you visualize when you see the beast in your mind?” he asked.
“Before today, I thought of it as a giant, blurry monster.
But after learning that the beast is a cat, that’s how I picture it now.” She smiled. “Not a little house cat, of course. They aren’t scary enough. More like a big cat that roams the mountains.”
“Makes sense,” he said.
Minka set the other half of her fourth fajita on her plate and gave him a curious look. “Would you mind if I ask you a personal question?”
His mouth twitched as he prepared another fajita. He wasn’t used to Minka being so reserved. She usually said whatever was on her mind, regardless of whether it was personal or not.
“Go ahead,” he said.
“The first time we met, I had claws, fangs, glowing red eyes, and I tried to kill you. Since then, I’ve spent most of the time telling you about an imaginary creature that lives inside my head and makes me act like a monster. How are you so calm about that? Most people would have run away already.”
Angelo chuckled. Not exactly the personal question he’d expected, but then again Minka rarely did the expected.
“Well, my mom was full-blooded Cherokee, and I grew up around all kinds of Indian folktales and legends.
My dad was in the army, and whenever he was deployed, Mom would take my sisters and me back to the reservation where she grew up in Oklahoma. I’d stay up half the night listening to the old men tell stories about shape-shifters, animal spirits, skin-walkers, and trickster spirits.” He grinned. “I’m not saying I necessarily believed in all that stuff back then, but after meeting Ivy, Tanner, and the other shifters at the DCO, it just didn’t faze me that much.”
Minka looked at him with wide eyes. “You’re a real American Indian? Like in the movies? With horses and everything?”
He laughed again. The expression of wonder on her face was adorable. “First, I’m only half-Indian. My dad is Mexican, so there’s that. And second, Native Americans are almost nothing like you see in the movies. We don’t all live in tepees and ride horses. In fact, I don’t even own a horse.”
Minka was a little disappointed about the no-horse thing, but she was fascinated with what it was like growing up on an Indian reservation and being surrounded by all those legends. She immediately asked him to tell her some Indian stories. It had been a long time since he’d thought about them, but to make her happy, he dug through his head and tried to remember every tale he’d heard as a kid.