Read more »
Posted by StacyUFI at 7:00 PM No comments:

UFI welcomes Amanda Carlson Author of The Jessica McClain Series. Thanks for Joining us!!

I went to high school with my husband, but didn’t meet him until 6 years after graduation, by total chance. Now my kids go to the same school! (Little known fact: He was the top result match of a “dating sheet” we filled out as a school for a Valentine’s fundraiser. I could’ve saved myself some time if I believed the results, LOL.)

I love going for walks around the lakes in the city. Minneapolis is known for its city lakes. I also love going to the movies and playing Scrabble. I’m a Scrabble addict. It’s a great distraction during the day when I need a quick mind break. I play a few turns and I’m ready to get back into writing.

Free writing a scene and not knowing what comes next, and then having it surprise and delight me. The pure creating gets me every time.

Lately I’ve been trying to get back into an exercise routine. Most of the winter was spent editing 3 projects and I carried a lot of stress. So now, each morning I try and ride my recumbent bike and catch up on an episode of Dr. Who. Then I write in the morning and try to edit or complete interviews in the afternoon. Working well so far!

I’m reading Amanda Bonilla’s SHAEDES OF GRAY right now and I’m loving it! I’ve read all the big names and have enjoyed them all. Kim Harrison is a rock star in UF and for PNR, Kresley Cole, has an amazing voice. Her characters jump off the page. It’s all about voice to me and if the writer has done it well. Those authors are on my “automatic” buy.

How would you pitch the Jessica McClain series to someone who has not heard of it before?

Jessica was born the only female in an all male race—except she’s no wolf. After years of living with the treats to her existence, she’s ready to fight. In BLOODED, the novella, we see Jess in the one pivotal moment, the one where she fights for her freedom and is willing to die for it. In FULL BLOODED, her life takes an altering turn in the first pages. From then on, the entire novel moves quickly as the supe community finds out her secret and she, once again, has to fight for her life.

Can you tell us a little bit about the world that the Jessica McClain series is set in?

My world is a modern day city, Minneapolis specifically, and the supe community is under wraps. There are witches, shifters, vamps & demons in my world, all with varying degrees of power and talent. It was such a blast to write this and figure out all the different rules and parameters that shape a world. That’s the very best part of writing urban fantasy!

Do you have a favorite scene in Blooded?

The opening scene is one of my very favorites. Next is the interaction with her brother at breakfast. You get a real sense of their relationship and her humor.

I love writing Jessica. She’s really strong and sarcastic and she doesn’t take anything for granted. The hardest for me was taking those secondary characters and making them pop—each with their own voices. Writing in first person is tricky, because the emotion and tone has to be set by the dialog most of the time. I hope I achieved it and you all love something about each of them.

Blooded is an opening novella to the Jessica McClain series. Do you feel it’s important for your readers to read it before they jump into Full Blooded when it is released Sept 11, 2012?

I think it’s a great start to the series. It’s set 7 years prior to the novel, so it’s not necessary for continuity, but if you want greater character depth for Jessica, I would recommend it! It became a really fun, fast-paced prequel to the novel. The reader gets a better understanding of who she is and where she came from. I’m assuming people will read it after the novel as well. The novella gives the reader another piece of the puzzle and that’s fun anytime.

I’m hoping to contract for more books in this series, but I’m also working on two other “sekrit” projects—both in urban fantasy. Gotta stick with what you love! Neither of them are about wolves, but both are fast-paced and action packed. Just the way I like it. 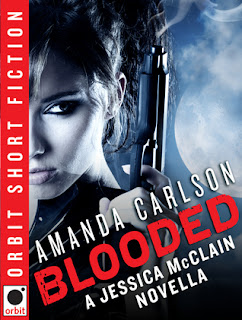 
Jessica McClain was born the only female in an all male race. The only problem is-she's no wolf. Called a curse, a witch and the Daughter of Evil by the superstitious wolves, Jessica decides to fight for her freedom, at age nineteen, the only way she can-in the ring.

When she's brutally attacked right after her fight, is it enough to finally earn her freedom off Compound, or will she be forced to endure the hatred even longer . . .