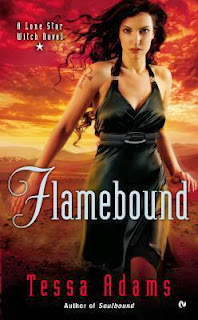 
After Xandra’s nasty run in with the Arcadian Council of Witches—where she was almost killed and her boyfriend, Declan, was almost framed for it—her plan is to lay low and figure out why its members would torment the people they are supposed to protect. Declan, temperamental and protective warlock that he is, doesn’t feel so reticent. And when violence erupts again, there’s no stopping him from pursuing revenge…

When a council member is murdered in a fashion that screams dark magic, Declan claims someone else beat him to it. Xandra doesn’t want to believe he could commit such a brutal act, but she knows he has a dark side—one that his former love interest Tsura understands better than she ever will. With Tsura back in town, Xandra doesn’t know whom to trust. And a killer targeting witches and wizards is still at large…


The witches on the council are being murdered and Xandra gets to witness it all compliments of her gift. If that wasn't bad enough she is connecting to a kidnapped child and is rushing to find her before it's to late.

The characters of this series take a lot of hits in FLAMEBOUND. Xandra's gifts start evolving, Declan's need for revenge is at an all time high and Xandra's family is targeted and will never be the same again. It doesn't feel like Xandra and Declan's relationship will ever be easy. They don't trust each other, their personalities clash a lot and they keep things from each other. I hope that changes because they make a great team when they actually work together and they make a hot couple. My favorite part of FLAMEBOUND? The ending. Wow, I was not expecting that. Anyone else see that coming? I was fooled 'til the end.

It took me a few chapters to get into book 2 and I seemed to have forgotten some of the events that happened in SOULBOUND so I had to catch myself up to speed. I constantly felt like the story was missing something or maybe I just wasn't into the story as much as I was in SOULBOUND? There were a few slow parts that might have contributed to the feeling of being unfulfilled? Will I read book 3? Of course. I still love what the author has done with the characters and the world they live in and I am still excited to see what will happen next.