Review: Of Flame and Fate by Cecy Robson 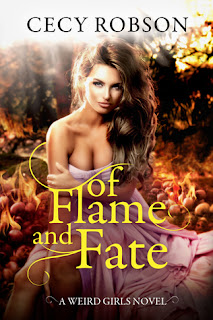 Taran Wird, who commands the power to wield fire and lightning, is an oddity in the supernatural world. But neither Taran nor her unique sisters compare to the bizarre entity known as Destiny. And Taran is assigned to protect her.

Born of two witches, Destiny is revered among the supernatural elite for her acute ability to predict the future. Her biggest prophecy involves Taran’s sister, Celia, whom Destiny decreed will bear children strong enough to take on the evil that’s rising. Yet Destiny is not alone in her predictions, or individuality.

When Johnny Fate, a rock star among humans and a male version of Destiny is discovered, his powers and Destiny’s clash, triggering the start of Destiny’s demise and altering the fate of Celia’s unborn children.

Taran, her werewolf lover Gemini, and their allies must determine if it’s Fate who will decide what will become of Celia’s children, or if their lives and the world will perish with Destiny.


There is a lot going on in OF FLAME AND FATE, but unfortunately book eight just didn't do it for me.


I think my biggest dislike of OF FLAME AND FATE was that there was just too much going on in most of it. I found myself getting confused during hectic scenes which left me frustrated and eventually bored. One good thing was that Taran isn't fighting herself throughout the book and she was in much better control of things because of it.

After the relationship turmoil in OF FLAME AND LIGHT I was glad that there wasn't a huge amount of strife between Taran and Gemini. There is still some distance between them and arguing going on, but they are together throughout the whole book so that is a plus.

There was plenty of action in OF FLAME AND FATE, but it always came at chaotic times and ended up just falling flat for me. I like to be glued to the pages during action scenes, but I found myself wanted to skip ahead during most of them.

I just couldn't get excited about much in OF FLAME AND FATE. The ending threw out some interesting information though, so fingers crossed that book nine turns out better for me.