UFI welcomes Author Marie Johnston. Thanks for Joining us!!

I was technically a published author before I released my first book. In college, I was a McNair scholar and did undergrad microbiological research under a Ph.D. My work was published in the McNair Scholars Journal, but also included with my professor’s papers. When I went on to be a public health microbiologist, my work was included in a CDC paper published in the New England Journal of Medicine. I was only included in the acknowledgements instead of with the authors, but that’s a story for another day…

Adult coloring books! Except those detailed pictures that would take hours to color are not for me. Mandalas are where it’s at. I’d love to do more sewing and crocheting, but since I’m still mostly a stay-at-home mom, any free hours are spent on my writing business. Much of it, except for the actual writing and most of the editing, I can do while watching TV with the hubs at night. I love to get into a good movie.

I love the actual story making. Writing is up there because that’s how the story flows. I have to have part of it out in writing before more comes to me and it’s like unwrapping a present. Many times, not even I know what’s next!

Before I can physically write, I have to check social media. Then I try to have a few scenes down in an outline, then write, outline a little more. After the first draft is done, then I figure out all the hardcore writing details like goals, motivation, conflict, character arcs, etc… During editing, I concentrate on those areas.

J. R. Ward, Kresley Cole, Larissa Ione, J. R. Ward, Gena Showalter, Karen Marie Moning, J. R. Ward, Laura Wright. I’m just a small fan of J. R. Ward. She was one of the first authors I picked up when I transitioned from reading fantasy to romance. I’ve followed her from her paranormal beginning and I’m just in awe of her writing. I love her Bourbon Kings work, too. It was my turn to sleep in one weekend morning and I hid in my room for two hours to finish The Angel’s Share.
KMM’s Feversong is out and I don’t dare charge my Nook. I can’t afford to go into reading hibernation right now!

How would you pitch Ancient Ties to someone who has not heard of it before?

I freely admit that I stink at pitches, but here goes:
Ancient Ties is a standalone shifter romance in my paranormal world. Two acrimonious Guardians have to partner for a mission and it brings them close enough to follow their attraction, until one discovers a promise he made in the past may destroy their future together.

Can you tell us a little bit about the world that Ancient Ties is set in?

My paranormal world takes place in the fictional twin cities of Freemont and West Creek that are loosely modeled after Minneapolis/St. Paul. The supernatural creatures in my world live among us, but hidden, and function in their own societies. I love the idea of the “other” world around us.

Do you have a favorite scene in Ancient Ties?

The second scene in the book. The first scene, we get to see the argumentative relationship between the two and how it’s affecting Kaitlyn. But in the second scene, we’re in his head and discover that he’s a deep character with intense emotions. Since I’m a pantser (write-on-the-fly) writer, and it’s pure joy for me to have a character unfold like that.

Which one character out of all your books was your favorite to write about? What about the hardest to write about?
She started out as Agent X in my very first book, Fever Claim, and she gets her own book, Pure Claim, at the end of that series. She’s a character that I can’t believe boring ol’ me can write. I get to revisit her occasionally in the quarterly short stories I write as a thank you to all my newsletter subscribers.
In Rourke, my vampire series, I struggled with both main characters even though I was so excited to write him. But he was as quiet and almost less forthcoming than he was in the book!

More shifters and vampires! Bishop, book three in New Vampire Disorder, releases in April and book four will release in September. The next shifter story in Pale Moonlight will be soon after those.
Later this spring, I’m so excited to release a contemporary romance, Unmistaken Identity. It has a rich hero and a fangirl who owns her own comic shop…unless he has the final say…
Another Fleet Week novella, Pulling Rank, will be released this summer. My Fleet Week series is a contemporary romance series about sailors finding romance during Fleet Week and trying to hold onto it through their long Navy separations.
__________________________________

Marie Johnston lives in the upper-Midwest with her husband, four kids, and an old cat. Deciding to trade in her lab coat for a laptop, she’s writing down all the tales she’s been making up in her head for years. An avid reader of paranormal romance, these are the stories hanging out and waiting to be told, between the demands of work, home, and the endless chauffeuring that comes with children. 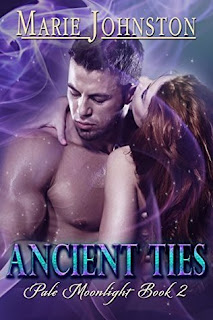 Born to be Guardians…

Chayton Eagle comes from a strong line of wolf shifters, his father an ancient in their pack. Chayton proudly acts as a Guardian, defending the colonies from danger—both from outsiders and from threats inside the pack. The one thing he doesn’t need is a human-raised female on his team—especially not one who passes out each time she shifts! Never mind that she was trained by elite Guardians, Chayton doesn’t need the distraction of a tall, sexy-as-hell redhead when he’s working. He has to focus. And he has to remember he’s scheduled to take the blood oath with a female, a long-ago pairing arranged by her parents. It doesn’t matter he and Kaitlyn are fated mates.

Destined to be Mates.

Kaitlyn Savoy knows Chayton is supposed to be her mate. Too bad he’s such an ass about her human upbringing making her weak. Too bad she’s been assigned as his partner to take down the feral shifters threatening one of the colonies. Too bad she’s so damn attracted to him. As the mission continues, Chayton is captured by the ferals, and Kaitlyn proves her worth as a Guardian. During the rescue, she uncovers the secrets of her past, secrets that will affect her future. Despite his best efforts, Chayton’s opinion of her begins to change, his respect growing—along with feelings he can’t deny. She’s become part of his life, part of his heart. A fact his soon-to-be inlaws notice—and they intend to put an end to the temptation Kaitlyn poses to Chayton.

Chayton stormed to his cabin.
A four hour drive. With Kaitlyn.
Spending the night. With Kaitlyn.
Roaming the woods. With Kaitlyn.
His heart pounded, his nostrils flared, and he huffed like a bear after a marathon. Slamming his front door open, he charged through and kicked it shut behind him.
Only then did he double over, hands on his knees, sagging to catch his breath.
Kaitlyn Savoy.
The sexiest thing he’d ever laid eyes on.
The shifter he was never supposed to meet. His mate.
And she was oblivious to it.
He stomped through his cabin. Her lack of mating insight was for the best. If he had his pick of shifters, she’d be the last on the list. Besides, he was promised to another. Kaitlyn was young yet, and based on her blasé to distasteful reaction to him, she’d have no trouble moving on. Or not. Her sanity may last longer than most who don’t anchor their souls with a mate. But if she needed to bond, she wouldn’t have a problem finding someone. Like that bartender at Pale Moonlight.
His fangs bared and a growl escaped before he stopped himself. He’d never caught her with him, but stories had it the bartender helped her assuage the physical needs shifters of their caliber experienced. She hadn’t been with the guy since Chayton had been around. That decision had increased the bartender’s life expectancy considerably.
No. No. It shouldn’t matter. She needed to move on and he had no say with who. Chayton straightened and wiped his brow, which had dotted with sweat. It was always an effort to contain his reaction around that female.
Why her?
Ancient blood—pure, undiluted shifter blood—ran through his veins, thanks to his father. His Sioux mother would roll over in her grave. Chayton’s bloodlines were rich with history and honor.
The female he’d sworn himself to, Tika, would make a lovely mate instead. Soft brown eyes, feminine curves, and ancestry as strong as his. In fact, she was coming of age soon. For him, that was twenty-five. Her parents had pushed for their union when she turned eighteen, but that had seemed too pervy for him. At two-hundred and twenty-nine, he wasn’t about to jump a girl the second she was legal. If it was up to him, he’d wait even longer, but even Tika had pushed for their binding.
His stomach rumbled, alerting him that he’d missed dinner. Not that he’d eat at the main lodge anyway; it was a tactic he used to avoid Kaitlyn.