UFI welcomes Meredith Allard Author of Her Dear and Loving Husband. Thanks for Joining us!!
Top 5 Reasons to Marry a Vampire

For human girls, marrying a vampire might not be their first choice. There are a few reasons why that could be too creepy. The blood-drinking thing can be troublesome, I imagine. But maybe you’re Sarah Alexander, very human and newly moved to Salem, Massachusetts, and you’re getting cozy with the handsome if enigmatic James Wentworth. You’re newly divorced and gun-shy about jumping too quickly into a new relationship. But James has an odd attraction for you and you feel pulled toward him as if by an invisible line. One night you discover that that handsome if enigmatic “man” you’ve been spending time with is a vampire. What do you do? Ditch him? Run away screaming, brandishing garlic and wooden stakes? Investigate further? Try to make it work however you can? All of the above?

For Sarah, and for anyone else contemplating life with a paranormal hottie, here are the top five reasons to marry a vampire.

5. You’ll only see him at night (that is, if he’s the nocturnal type). If he’s a hunky vampire, a few hours together at night should work just fine.

3. He can open stubborn spaghetti sauce jars or stuck bottle tops. He can move heavy furniture and carry your packages. Vampires are very strong, after all. Use that to your advantage.

2. He won’t lose his looks. You won’t have to watch your vampire get a beer belly as he grows older. He won’t lose his hair or sag anywhere unsightly. He’ll stay easy on the eyes without the expense of Botox or other expensive injectibles.

1. He lives forever so his devotion is forever. Once a vampire loves you, he always loves you. Not a bad deal, if you ask me.

So after weighing the pros and cons, does Sarah marry vampire James after all? You’ll need to read Her Dear & Loving Husband to find out. Be aware. 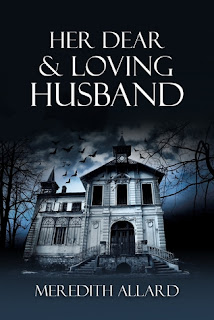 How long would you wait for the one you loved?

James Wentworth has a secret. He lives quietly in Salem, Massachusetts, making few ties anywhere. One night his private world is turned upside down when he meets Sarah Alexander, a dead ringer for his wife, Elizabeth. Though it has been years since Elizabeth's death, James cannot move on.

Sarah also has a secret. She is haunted by nightmares about the Salem Witch Trials, and every night she is awakened by visions of hangings, being arrested, and dying in jail. Despite the obstacles of their secrets, James and Sarah fall in love. As James comes to terms with his feelings for Sarah, he must dodge accusations from a reporter desperate to prove that James is not who, or what, he seems to be. With the help of their friends, witches Jennifer and Olivia, James and Sarah piece their stories together and discover a mystery that may bind them in ways they never imagined. Will James make the ultimate sacrifice to protect Sarah and prevent a new hunt from bringing hysteria to Salem again?

Another Historical type book that surprised me with how much I enjoyed it. Sarah has always been pulled to Salem and after she divorced her husband of 10 years she decided it was time to move there. Sarah has always been plagued with dreams of someone living and dying during the Salem witch trials. After she moves to Salem the nightmares get worse and she finally has a way to peace together the mystery of them. James lost his wife during the Salem witch trials and has never gotten over her. He has lived many lives in many different places throughout the world and finally moves back to Salem and into his home he shared with his wife Elizabeth all those years ago.
The story is set in modern times with flashbacks to the Salem Witch trials.I really enjoyed the flashback dreams and memories. I usually don't get in to Historical type novels but this isn't like those at all. The dreams and memories happen often but they are small (though important) part of the story and they really grab you and make you interested in the little details they reveal. The two realities blended really well and when everything came out to being what it was it was done in a gradual "real" feeling way. I enjoyed the characters, I enjoyed the storyline, the plot was interesting, and the pace was a bit slow throughout but it was an overall enjoyable book.  I'm glad this wasn't a stand alone because I look forward to seeing what happens next for Sarah and James.
I gave it 3.5/5 stars
__________________________________


RULES
1)  Leave a comment or question for Meredith =)
2) This giveaway is open to International readers.
3) Must leave an email address so I can contact you.