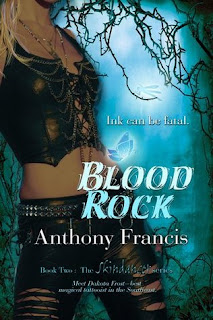 I absolutely LOVE the covers of both books in the Skindancer series. I have said many times before that I have to like a cover to pick up a book (I know, I know don't judge a book by its cover and all that I just cant help it) and both covers grabbed me with one glance. Dakota Frost isn't your typical girl. She has a death hawk, she wears a lot of leather, has magical tattoos covering most of her body and isn't afraid to tell it like it is. Dakota is defiantly bad ass but she is also has a big soft spot and is extremely caring and protective of those she loves. There is a lot of character, relationship and world development in FROST MOON so I would definitely recommend reading that before you jump into BLOOD ROCK.

BLOOD ROCK starts off right away with action and suspense. The book revolves around some new magical graffiti that is killing vampires, were's and humans. While trying to solve the mystery of the graffiti, Dakota is also adjusting to life as a mother of her "adopted" daughter Cinnamon, it all gets jumbled up together and leads to some stressful situations that puts everything that Dakota has built and worked for in jeopardy.  My only big complaint with the book is the romantic relationship stuff. I wish it would have went a different way and that Dakota was still with the original person she started out with but who knows what will happen in the future. BLOOD ROCK is full of interesting scenes, imaginative magical graffiti, action, suspense and heartache. I enjoy Anthony's writing and his interpretation of magic in the form of Tattoos and graffiti. His characters are well developed and liked or hated like they should be. The relationships between the characters are always real and heartfelt. I hope that the third book doesn't take to long to come out, the series is a great addition to the Urban Fantasy Genre.

**These are the new UFI Giveaway Faq and Policies**

Posted by StacyUFI at 2:49 AM No comments: