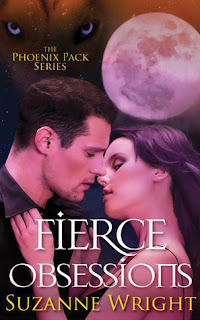 When raven shifter Riley Porter was given sanctuary by the Phoenix Pack, she let them believe she had left her flock. Reluctant to divulge the secrets of her past, she was still embraced as family. Only Tao Lukas, the protective and passionate Head Enforcer of the pack, was resistant to the enigmatic shifter. Until Riley started to arouse in him something other than suspicion.

Tao doesn’t trust lone shifters, especially ones so guarded—and tempting. But the sexual tension between them is making them both come undone, and vulnerable to more than desire. All Tao wants is for Riley to stay with him and to trust him with the truth of her past.

As Riley’s mysteries come to light, so does a danger that threatens not only her life but the safety of the entire pack. For Tao, keeping Riley safe means keeping her close—forever—as his mate.


I can't get enough of The Phoenix and Mercury packs, so when I see a new book come up, I have to grab a copy and read it ASAP. I have loved each and every couple that was featured and introduced and I continue to love the world and storylines.

Riley has been a mystery since she was introduced and I really enjoyed getting to know her and her backstory. She doesn't have as much baggage as I thought she would, but there are things following her around keeping her from really getting settled in the life that she deserves. It always seems to amaze me how kick butt and capable the woman that are introduced are even though all the men are alpha, must protect the little woman, types. Riley definitely can protect herself and it was fun watching her navigate her new reality with Tao. Tao doesn't like outsiders and he immediately felt that Riley was a danger to his pack, but she quickly proved that the only danger she poses is to his heart. I always liked Tao so it was nice watching him find his mate.

Watching the new couple navigate their separate issues—emotional and physical—was interesting. They have a ton of chemistry and they are both equally protective of the other even though they both try to keep their distance at different points. Their mating bond was actually less difficult than past relationships in the series and it was nice to not have the connection blocked for an extended period of time.

One of my favorite things about this and the Mercury pack series is how involved the other pack members are in the stories. I never have a chance to miss past couples because they are present and involved at every turn. I love seeing them and love finding out the new things that have happened since their stories ended.

Do yourself a favor, read FIERCE OBSESSIONS and then pick up some of Suzanne's other books. I have enjoyed all the ones I have read so far.