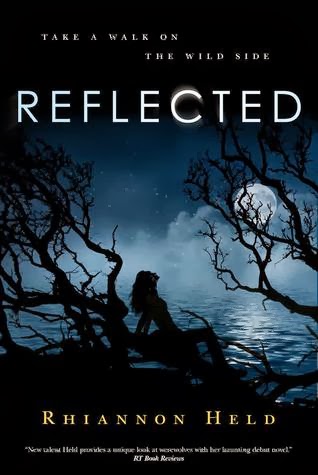 
Falling in love in a werewolf pack leads to some very bad choices in this new novel from the author of Silver.

Rhiannon Held continues the secret lives of the werewolf packs that live and hunt alongside human society in Reflected, the third book of the series that began with her debut novel, Silver. Silver and her mate Andrew Dare are pack leaders of the entire North American werewolf population, and that makes the more traditional packs in Europe very nervous indeed. It’s getting hard to hide from human surveillance.


Although the conflicts in REFLECTED turned out to be pretty predictable I still enjoyed the next installment in Silvers journey.  Dare is called away and Silver has to hold the pack on her own. They both felt it would be pretty easy but unfortunately things go wrong.

The pack dynamic has changed a lot since SILVER. While TARNISHED was filled with pack politics REFLECTED gets back to the characters with a side of pack politics. Silver and Dare don't get a lot of time together in book 3 and I missed him for most of the book. They are just to awesome together to be separated. When Dare leaves Felicia decides to rebel in the worst way. The way she treated Silver really broke my heart. Silver is forced to once again "un-break" herself and it is so hard to watch her go through the pain that causes.  By the end things have once again changed. Although their relationship needed to change, I wish their conflict had not taken up the whole book. I still really love Susan. She has grown into her pack position and she is a great friend and support to Silver. Anyone that still sees her as human quickly sees otherwise.

I didn't feel like REFLECTED was as strong as the previous books but it was still a smooth, fast, intriguing read. Held's world still draws me in and her writing and characters keeps me reading. I don't see any mention of a book 4, please tell me the series isn't over! I know Silver has her pack and family now but I need more.