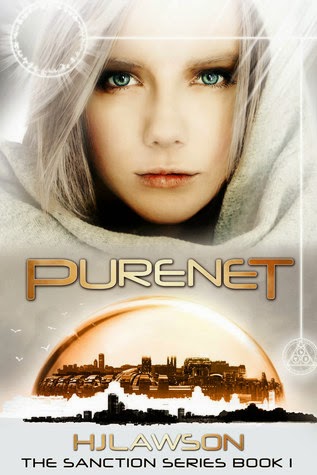 
Purenet is one of six wealthy Sanctions, formed by the Emperor and the Untouchables after a devastating world war.
Only those born in Purenet have the privilege of living under the dome, protecting their bodies from the sun’s deadly UVA rays.

Skylier is desperate to escape her underground confines and save her mother’s life.

On a school visit, she hears something she’s not supposed to, and now she realizes that not only is her whole life a lie, but she is in grave danger… She doesn’t know who to trust, and her enemies are everywhere… even closer than she realizes.

Now she is in a race against time to save not only her life, but her mother's and those she cares about. And if she fails, she'll suffer a fate worse than death...


PURENET is a pretty quick paced and easy to read story. I liked the world and the author did a good job of explaining the characters and their place in the story.

I didn't fully connect to the characters. I liked them fine and Skylier played a strong female role, I just wasn't fully invested. I was highly disturbed by her brother's obsession with her to host his and his wife's baby (which is wrong considering it would really be Skyler and his baby, if I read into that right). There is a bit of a love triangle in PURENET, but it doesn't really get into a romance.

A LOT happens but its really quick and to the point. The ending was decent and unpredictable which was nice. It does end on a bit of a cliffhanger though. Will I read more? Maybe, it was a short book so I think book 2 might be as well and the story does have potential.