UFI welcomes James R. Tuck Author of Blood and Bullets. Thanks for Joining us!!
What can you tell my readers about yourself that they might not know from looking on your bio or reading in another interview?

Well, there’s a lot. I love comic books. I am quite the Southern cook. My dog is a spaz. I own a pair of toe-shoes that I enjoy wearing. I am obsessed with 24 on Netflix. Hmmmm, let’s see, what else? Oh yeah, boxer-briefs…the best of both worlds.

Down time? There is no down time. LOL. I have three full time jobs going on. Writing, owning and running a tattoo shop, and building a career as a professional writer. But when I am not doing any of that I love spending time with my family. They are really great and I enjoy them as a group or individually.

It’s a toss up. I love when someone enjoys my book. That is the best feeling in the world. When something I made up is cool to someone else.
I also LOVE being able to now go up to writers that I have loved reading for years and speak to them. When you are a fellow writer, not only do they not look at you like you were three-headed monkey with a sock full of poo, they actually accept you and take you in and show you the secrets of the Illuminati.
(Wait, not the last part. The Illuminati is made up, it doesn’t exist. Really. It. Does. Not. Exist.)

Nope. I am very loosey-goosey about when and how I write. Every day is different and that means that every day I have t9o adjust when and what I write. I do try to have pants on when I write though. The coffee shop gets really uptight about that for some reason.

Man, I love this genre. Of course I love Laurell K. Hamilton’s Anita Blake series. The Dresden Files. The Nightside series. I love, love, love the Mercy Thompson series from Patricia Briggs. The Void City series from J.F. Lewis kicks ass. Faith Hunter’s books always deliver. Jonathan Maberry writes a helluva book. Jenna Maclaine has a great series that I am eagerly waiting for the next installment of. Larry Correia’s books are fun. Linda Robertson’s stuff rocks too. Two of my good friends Adrienne Wilder and Annabel Joseph are tremendous writers. If you don’t mind the racy stuff definitely look them up. There are a ton more, but off the top of my head those are some great ones.

How would you pitch Blood and Bullets to someone who has not heard of it before?

Can you tell us a little bit about the world that Blood and Bullets is set in?

It’s a dark world where the monsters are truly monstrous. It’s a hard world where Deacon is driven to harsh choices to keep humanity safe from evil they don’t even know exists. It’s a world where you will find not only vampires but Were-spiders, cursed Immortals, and undead strippers. It’s crazy.

Do you have a favorite scene in Blood and Bullets?

I really like the scene where we meet Charlotte. It’s spooky and interesting. Everyone who has read the book loves her and her first appearance on the page.

I love them all. Deacon is the main character for a reason. I have a lot of love for him, but Father Mulcahy, the chain-smoking, coffee-swilling, foul-mouthed Catholic priest who is his mentor, Kat, the damaged girl who helps run his club, Larson, the wanna-be vampire hunter, and the others that I can’t tell you about without spoiling the book. LOL. I will say that Father Mulcahy is a scene stealer though.

Well, there will be six releases in the Deaconverse by the first part of 2013, three full novels and three e-novellas. After that I have a lot of things in the works that I can’t talk about. There is a short indie movie that I am in the first stages of. It’s from a short zombie love story I wrote that can be found in the e-anthology called One Buck Zombies. It’s only .99 cents and it has my story “He Stopped Loving Her Today” and four other zombie stories from four other authors. It’s available everywhere e-books are sold. Other than that, check my website for more stuff as it develops. www.jamesrtuck.com
__________________________________ 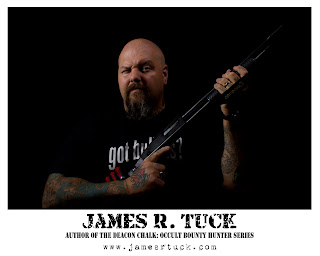 Born and raised in Georgia I grew up enjoying all that the south had to offer. Good food, adventure in mild winters and hot, muggy summers, excellent music, and good church folks.

Now I live in a nice house that has a great yard with the missus, the daughter, the son, the nephew, and six goofy dogs. I own my own tattoo shop, family tadition tattoo, and i am a published author. 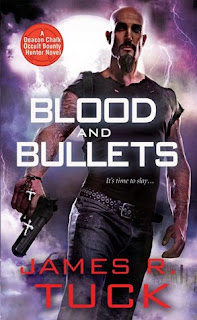 
He lives to kill monsters. He keeps his city safe. And his silver hollow-points and back-from-the-dead abilities help him take out any kind of supernatural threat. But now an immortal evil has this bad-ass bounty hunter dead in its sights…

Ever since a monster murdered his family, Deacon Chalk hunts any creature that preys on the innocent. So when a pretty vampire girl “hires” him to eliminate a fellow slayer, Deacon goes to warn him—and barely escapes a vampire ambush. Now he’s got a way-inexperienced newbie hunter to protect and everything from bloodsuckers to cursed immortals on his trail. There’s also a malevolent force controlling the living and the undead, hellbent on turning Deacon’s greatest loss into the one weapon that could destroy him…