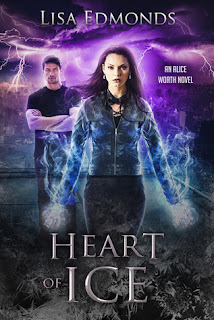 Even the coldest hearts can burn...

After closing a big case for the Vampire Court, mage private investigator Alice Worth is relieved to be back solving magical mysteries with her ghost sidekick Malcolm and spending quality time with sexy alpha werewolf Sean. Her latest case puts her on the trail of a burglary ring targeting wealthy collectors of magical objects. Meanwhile, Alice’s grandfather, crime lord Moses Murphy, fights a local boss for control of the city. Soon a new danger emerges: Moses’s new lieutenant is someone Alice knows and this is one family reunion she wants to avoid at all costs.

When Sean is injured as a result of her investigation, Alice faces the wrath of his pack and finds herself in a carefully laid trap. To save the city from Moses and his lieutenant, she risks capture by her grandfather and unimaginable torture at his hands. To save Sean, she risks losing everything she's fought so hard to gain. But Alice has never backed down from anything in her life and she’s not about to start now...


The Alice Worth series has quickly become one of my must read series.

The characters really shine in this series. Alice gets more and more likable with each book. She is still a little closed off, but she has really grown from the loner of book one. I really enjoy learning about her past and watching her slide into a future with friends and allies at her side. Malcolm has really grown into an essential character. I have a feeling there is a lot more to his involvement with Alice, but he has grown on my heart, so I hope it doesn't turn out to be bad.

There is a nice amount of romance for an urban fantasy series. I sometimes think there might be a love triangle, but Sean continuously proves he's the one for Alice. He has his moments where I might want to smack him, but him and Alice work really well together. Charles really wants something to happen with Alice and I do get the vibes between them, but something major would have to happen to make me feel like they would be good together.

I continue to love this series and it's characters. With each book comes more answers, but there is still so much for us to learn about the world and its characters. I really enjoy Lisa's writing style and the progression of the overall story line. I'm looking forward to book four.