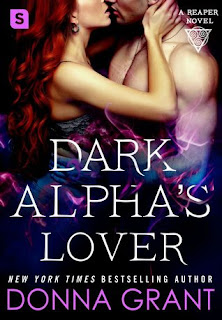 
There is no escaping a Reaper. I am an elite assassin, part of a brotherhood that only answers to Death. And when Death says your time is up, I am coming for you…

I answer to no one but Death. I am impenetrable, impervious, immortal. I exist to do Death’s bidding and no one–not Reaper nor human nor Fae–can stand in my way. Except for the bewitching half-Fae, Catriona. She swears the magic in her family passed her by, but I know better. This woman is strong. This woman is powerful. And when her abilities surge forth, no one will be able to stop the Dark Fae from coming for her. Except for me. I want to keep her close. I want to keep her safe. I want lose myself to her, again and again…

Where do you get your inspiration?
Everywhere. TV shows, music, movies, books, and real life.

How long on average does it take you to write a book?
A full length book takes me 5-6 weeks total before I turn it into my editor. A novella takes 3 weeks.
What is your writing Kryptonite? I don't really have any. ::knocks on wood::
What books have most influenced your life?
I believe that every book I have ever read has influenced me in one form or another. They've shaped my thoughts and my actions. I'm one that believes a book comes into a person's life when they need it the most.

What is the first book that made you cry?
I can't remember the title, but it was a western where the heroine was kidnapped by Indian's and she fell in love. It wasn't a romance because there was no HEA, but I bawled.

What was your hardest scene to write?
It's different with every book. Mostly its the sex scenes because there is so much more emotion that goes into those scenes than in others, and I like to get it right.

What did you edit out of this book?
lol. I write "that" a lot. I edit most of those out. And the use of names. I don't realize when I'm writing that I do it, but when I read over it, I do.

New York Times and USA Today bestselling author Donna Grant has been praised for her “totally addictive” and “unique and sensual” stories. She’s the author of more than thirty novels spanning multiple genres of romance including the bestselling Dark King stories. The acclaimed series features a thrilling combination of dragons, the Fae, and Highlanders who are dark, dangerous, and irresistible. She lives with her two children, a dog, and four cats in Texas.