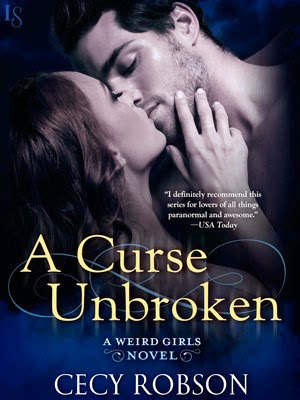 The preternatural world is changing. After a massive magical throwdown tore apart the established order, the dark elements are rebuilding their ranks unopposed. Celia Wird’s world is changing, too. She’s the mate of the pureblood were Aric, and his Warriors are honor-bound to protect her family as she and her sisters recover from unimaginable horrors.

Celia hesitates to reveal the true extent of the Wird sisters’ trauma, but they aren’t the only ones keeping secrets: Aric and the werewolf Elders are tracking a stone that grants limitless power. So is a tough coven of witches. Then Misha, a master vampire with his own plans for the stone, sends Celia after it. Can she and the vamps beat both the weres and the witches to the treasure before it falls into the wrong hands?

Fearing for Celia’s safety, Aric begs her to stay out of the hunt. What they don’t realize is that they’re the ones being hunted. But Celia’s ready to prove that she’s not easy prey.


A CURSED BLOODLINE left me depressed and heartbroken so I was excited to see a review copy for A CURSE UNBROKEN shortly after I was done reading it.

I'm not sure how Celia managed to get out and stay out of bed after the events of book four, but she did and she kicked butt. There are some pretty crazy events that take place and her and Aric's relationship isn't without drama and little spats, but it was great to see both of them in a good place and TOGETHER like they were meant to me. Aric had to work really hard to letting go of his huge need to protect Celia and watch her help take down the newest threat. She is right in the thick of things along with him for the most part and I think she did a great job.

Celie isn't the only one that has had a really hard time since the beginning of the series. Each sister has lost something along the way and has changed from the women we were introduced to. It was hard to witness their struggles and it was really hard to watch the impact it had on the sisters as a whole. I think each of them had something in A CURSE UNBROKEN that pushed them towards healing, but they all have a long way to go from here.

There was a lot of action and danger involved in book five and it all started off right away. Not a lot of breathing room before the next crisis is introduced (which I loved). I am a little iffy on how I feel about the ending of A CURSE UNBROKEN. I didn't realize that this was the last book of the series with Celia's POV so that makes my iffy-ness even worse. Even though I am happy with Celia and Aric's relationship, there is still so much left up in the air and things unanswered and I don't really feel like Celia's story arc is finished. I guess giving the other sisters their shot with their voice is only fair, but I am still really sad that Celia's voice is over.