Review: Rise of a Phoenix by Shannon Mayer 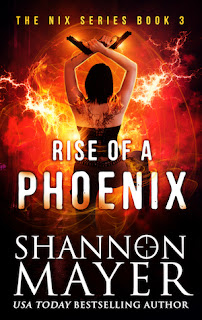 To save my son, I would give up my soul. To survive this journey and stop those who face us I may have to do just that.

My son is waiting for me to bring him home, to rescue him from the horrors he’s faced on his own. I won’t take the chance I will find him only to fail him again. Which means I must unearth a way to kill his captor, a man who is immortal. A man who made a deal with the devil to attain his power. As it stands there is only one way to end that monster’s life. A way that is far from simple.

With a pair of guns strapped to my hips, and an ally at my side, I will finally face down the evil that created me, crossing the world to do so.

I can feel death stalking us, waiting for us to slip up. But I am no stranger to death, and I will face him too if I must to save my boy.

To bring him home.

If you thought I was deadly before, its nothing to what I will bring in this final round.


All those pesky questions that you have had since book one are finally answered in RISE OF A PHOENIX.  Some things I saw coming, many I didn't, RISE OF A PHOENIX is full of twists and turns that will leave you both sated and wanting more.

The multiple POVs come into play more often in book three. For such a young boy, Bear sounds so grown up at times. I really enjoyed the relationship development between Nix and Killian . They fit together really well and I liked that they weren't immediately throwing themselves at each other considering everything that has happened.

I only had one small issue and I absolutely hate to mention it, but like some of Shannon's other books (ie: The Venom Trilogy) I did feel that there were a few parts in RISE OF A PHOENIX where the dialog felt forced and not as smooth. It didn't feel like natural conversation, more like trying to force words from a script into reality. I am a huge fan of Shannon's work, so I don't say this lightly. I didn't feel like the previous two books in this series had this issue, and thankfully RISE OF A PHOENIX didn't have a ton of it, just a few spots.

Nix's story doesn't feel over to me. The current storyline is finished, but the end felt like it was left open for more. I hope to see more of Nix and her growing family in the near future.