UFI welcomes Jillian Stone Author of The Miss Education of Dr. Exeter. Thanks for Joining us!!


There is something about Paris in the fall that brings out the devil in Dr. Exeter...

...and the beast in mild-mannered Mia, whose animal urges transform her into a gorgeous panther at the most inconvenient times. While there is no cure for her condition, there are techniques to alleviate the physical urges and inappropriate behavior. Much to Exeter's distress, it is up to him to help Mia through this difficult time of transition.

The Miss Education of Dr. Exeter, is the third novel in the Phaeton Black, Paranormal Investigator series. readers who have enjoyed books one and two are well aware that The Moonstone and Miss Jones ends on a cliffhanger––Phaeton lost in an alternate universe known as the Outremer.

In book three, physical reality continues to unravel on both sides of the cosmic rift, and  it is up to the good doctor to extract Phaeton Black from the clutches of a diabolical techno-wizard—or both he and Phaeton could lose the women they love to love…forever. To accomplish Phaeton's release the doctor must let loose forces he has long kept under control, including his attraction to Mia.  Get ready for a moody tale of forbidden passion, romance and daring adventure!

Jillian Stone is the author of The Phaeton Black, Paranormal Investigator series, which includes The Seduction of Phaeton Black,  The Moonstone and Miss Jones and the just released, The Miss Education of Doctor Exeter. Jillian is also the author of The Gentlemen of Scotland Yard series. She is thrilled that two of the novels, An Affair with Mr. Kennedy, and A Dangerous Liaison with Detective Lewis, are both 2013 Daphne du Maurier finalists!

You’ve been quoted as saying that the Phaeton Black books are an acquired taste. What do you mean by that?
Jillian: From the day The Seduction of Phaeton Black released I could tell these books were either going to be maligned or praised. Phaeton is a dark, Byronic hero and if readers do not recognize a kindred spirit in Phaeton, then all his humor and charm are lost on them. Romance readers are often looking for a champion––a super hero nice guy. The funny thing is, Phaeton is all of those wonderful things and more, it's just that those traits aren't so obvious––he makes you reach a little to find the hero in him. These books are not romance in the traditional sense, they are immorality plays with a conscience, or wickedly sensual adult fantasies. Even I'm not sure what to call them. Lol!

This is a tricky love story between Exeter and Mia. What were some of the pitfalls?
Jillian: Well, the fact that Mia has been his ward since she was a child, makes the love story difficult, but it also gives it tension and a darker edge. Mia has grown into a beautiful young woman who is very much attracted to her guardian, Dr. Exeter. She's loved him since she was a child, but her feelings have shifted in disturbing new ways. As the book opens, Mia struggles with her inner wild cat, as well as her adult feelings for Exeter––is it that cat or Mia or both?

And what about Exeter? How does he deal with Mia?
Jillian: Not very well, at first. He is torn between his duties as her guardian, his desire to help her gain control over the panther, and his growing physical attraction to her.

At least half the book takes place in Paris, France––what kinds of adventures do Dr. Exeter, Mia and the Nightshades encounter there?
Jillian: There are two parallel worlds in the novels, one circa 1890 and the other is closer to 2013. In The Miss Education of Dr. Exeter, they find out that Paris, has two dimensions as well. I really enjoyed researching the Paris catacombs, the miles of underground quarry and the nightclubs, bistros and couturiers of 1890 Paris! There is also an authentic 1890 fetish party at the climax––but I can say no more!

What about this techno wizard, Prospero? Where does he fit into the picture? Jillian: Prospero is one of my best antagonists yet. And I hope to do a good deal more with him in future novels. He's the tortured messiah of great inter-dimensional empire, but I can't reveal much more than that at the moment. He is going to put readers through a number of changes in the next three books––for awhile readers are not going to know if he's a good guy, a bad guy or just plain mad.

For me, the joy of writing has to do with spinning a tale that reaches into the mythology of the culture. One that strives to be both mesmerizing and enthralling. I don't want readers to be able to guess the ending or know everything there is to know about a character. Maybe I just love surprises, which translates into surprising readers!

Do Exeter and Mia find a way to work it out?
Jillian: Is there is a happily ever after? I'm not telling! For those of you who hated the cliffhanger in book two, I will say that there is a satisfying ending––though as in all the books, there are hints of more to come. 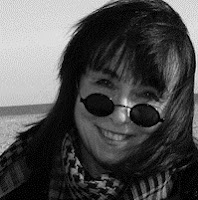 In 2010, Jillian won the RWA Golden Heart for An Affair with Mr. Kennedy and went from no agent or publisher to signing with Richard Curtis and being offered a three book contract by Pocket Books. That summer, she also won the erotica category of the 2010 Romance Through the Ages contest for The Seduction of Phaeton Black and was offered a three book contract by Kensington Brava. Needless to say, she has been busy writing books this past year and a half! Jillian lives in Southern California. 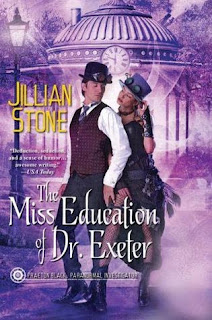 
Plunge deeper into the curious world of the deadly Nightshades.

The Moonstone is having a destabilizing effect on the time/space membrane leaving Phaeton trapped in a parallel mirror world where everything is opposite or upside down, yet oddly the same. He is held captive by Domina Valour and tested sorely in this darkly sensual third episode of the Phaeton Black series.

Gaspar Sinclair can't go after Phaeton. His physical body is unraveling before everyone's eyes. America Jones is large with child, but only she has the preternatural ability to locate Phaeton and bring him back. And Doctor Exeter's beautiful charge, Mia, has her claws in him. Quite literally.

To accomplish Phaeton's rescue, the doctor must let loose forces he hasn't the foggiest clue how to control, including his attraction to Mia.

While in the dimension of magnetic opposites, the doctor and Miss Jones attempt to reverse polarity to retrieve Phaeton and stop Gaspar from unraveling. Can America and Phaeton find a way to return together, or will this final test rip them apart forever? 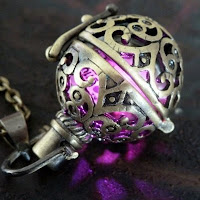 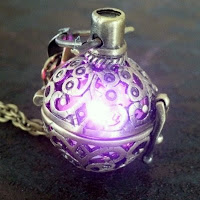