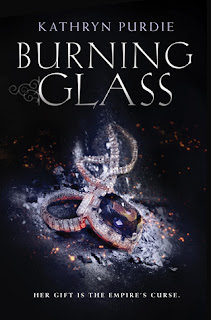 Sonya was born with the rare gift to feel what those around her feel—both physically and emotionally—a gift she’s kept hidden from the empire for seventeen long years. After a reckless mistake wipes out all the other girls with similar abilities, Sonya is hauled off to the palace and forced to serve the emperor as his sovereign Auraseer.

Tasked with sensing the intentions of would-be assassins, Sonya is under constant pressure to protect the emperor. But Sonya’s power is untamed and reckless, and she can’t always decipher when other people’s impulses end and her own begin. In a palace full of warring emotions and looming darkness, Sonya fears that the biggest danger to the empire may be herself.

As she struggles to wrangle her abilities, Sonya seeks refuge in her tenuous alliances with the charming-yet-volatile Emperor Valko and his idealistic younger brother, Anton, the crown prince. But when threats of revolution pit the two brothers against each other, Sonya must choose which brother to trust—and which to betray.


Through a tragic accident—which Sonya causes—Sonya is left as the last Auraseer and is sent off to the palace to serve the emperor. She is expected to keep him safe, but she has no control over her power and is more of a liability.

It would be really hard to feel everything someone else does. It was easy to feel bad for Sonya and form a connection with her character on that front, but I didn't always like her. Another area where she lost me was on the romance portions of BURNING GLASS. I could understand the pull between the brothers due to the emotions she is feeling from them, but at some point she has to pull herself together. She ends up doing that, but it takes the whole book. The constant love triangle was a bit boring.

I actually really liked the ending of BURNING GLASS. In fact, it was probably the best part of the story. A lot happens and it played out fantastically. Will I read more? We will see.