Review & Giveaway: A Fistful of Evil by Rebecca Chastain 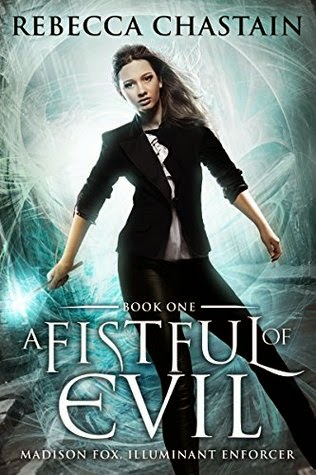 
Madison Fox just learned that her ability to see souls is more than a sight: It’s a weapon for fighting evil. The only problem is she doesn’t have a clue what she’s doing.

On the positive side, her money problems are over, she’s possibly discovered her purpose in life, and her coworker is smoking hot. On the negative side, evil creatures now actively hunt her, and deadly experiences are becoming the norm.

When she thinks it couldn’t get worse, a powerful evil sets up shop at a local hotel’s video game convention, and it’s got its eye on more than the gaming geeks: it is hungry for Madison’s soul. Madison needs to become an expert illuminant enforcer overnight to save her job, her region . . . and her life.

If Stephanie Plum fought evil with magic, it’d look a lot like this.


I ended up really liking Madison, but she is sort of treated like the class idiot. She walked into a job interview knowing zero about her abilities or even that having her abilities meant something. When she is thrust into this new job she knows nothing about, everyone just assumes she must know something. When she proves she doesn't she gets help, but it's very limited and a lot of stuff is kept from her, making it so she gets in even more trouble than needed. She is a quick learner, but has a way of messing things up with wanting to prove herself before she's ready.

A FISTFUL OF EVIL was a unique concept. I really liked learning about the abilities that not only Madison had, but also her colleagues.  There are also a lot of different personalities thrown into the mix and it was fun watching them learn about each other. The author did a great job with the world building. Everything was easy to understand and follow. I loved the hiding in plain site business plan as well as the weapons that are used on the job. I did find there to be a few spots in the book that slowed down. It wasn't horrible, but it was enough to almost make me start skimming at a few points. I think some stuff could have been cut out during those points to make if flow better.  Thankfully those were few and far between. A FISTFUL OF EVIL was a good start to the series and I plan to continue it!