UFI welcomes Kerry Schafer Author of The Between Series. Thanks for Joining us!!

Let's see – I'm fond of yoga and long walks out doors, both things that I'm trying to schedule into a crazy busy life right now. When I was in high school I played the tuba and I own an antique baby grand piano. My favorite color is definitely blue and I love to swim and hate to water ski.

Reading. I'm terribly short on down time these days, but when I have some I've usually got my nose buried in a book.

My very favorite part of writing is when surprises happen: characters who do unexpected things, new characters who show up unplanned, objects that appear in pockets or on shelves that turn out to be important to the story. That and the aha! moment when I figure out the answer to a complicated plot problem. This usually happens in the shower, and then I have to run out dripping to write things down before I forget.

Must? No. But I infinitely prefer to have my cup of coffee at hand.

My current favorite authors in the genre are Anne Bishop and Alex Bledsoe. Anne's new series starting with Written in Red is brilliant, and I've recently gotten started on Alex's Eddie LaCrosse novels which are great fun. I'm also in love with his new Tufa novels, which begin with the Hum and the Shiver

How would you pitch The Between Series to someone who has not heard of it before?

There is a place between dreaming and waking called the Between, where dreams and reality intertwine. Vivian Maylor is a dreamshifter, her job to guard the doorways of reality to keep the dream elements in their place. She's also a dragon shifter and struggles to keep her internal dragon under control. Her warrior protector and lover, Zee, was born to be a dragon slayer, which complicates their relationship. Together (and sometimes apart) they battle creatures of the Between and the Dreamworlds to protect the waking world while they seek to find a way to be together.

Can you tell us a little bit about the world that The Between Series is set in?

There are three worlds in this series. Wakeworld is the place we think of as reality. Dreamworld is the space regular humans enter when they dream, but to Vivian, just as solid as Wakeworld. And the Between, where all of the worlds mix and mingle. Here we find dragons and giants and other creatures, capable of sneaking through doors into Wakeworld when things go wrong. As they do, of course, because that's the fun part.

Do you have a favorite scene in Wakeworld?

I think my favorite scene is the one at the very end, so I can't tell you about it! It was a very elusive ending that came to me at the last minute. I was on deadline, and had locked myself away in a motel for the weekend to try to get the words written. I fell asleep at night still not quite sure how to end the book, but when I woke up in the morning there it was, waiting for me.

It's always fun writing Zee. He's a warrior with the soul of a poet. He loves deeply, and on one level is always a little appalled by his capacity for violence. This makes him complex and interesting. The most difficult for me in this book was Aidan, the Black Dragon Queen.

I'm working on Book Three of the Between now, so if you're enjoying this series there will be another book for you. The Dream Wars novellas, available now in ebook format, involve a different world in which anybody can request designer dreams from a being called the Dream Merchant – at a price. And I'm in the revision stages of a book called Dead Before Dying, in which an aging paranormal investigator gets caught up in a string of killings in a senior citizen's home.
__________________________________

Kerry Schafer was born and raised in Canada*, moved back and forth across the border several times, and finally settled on a compromise. She now lives in Washington state, but within an hour’s drive of her home and native land. Her childhood book collection traveled with her through all of those moves, and although she now owns a Kindle she continues to acquire books and bookshelves. During her lifetime, Kerry has worked as a lumber piler, an OB nurse, a secretary, and a substitute teacher, among other things. No matter where she lives or what she is doing, she finds a way to create writing time. Currently she balances writing and family with her work as a mental health counselor. 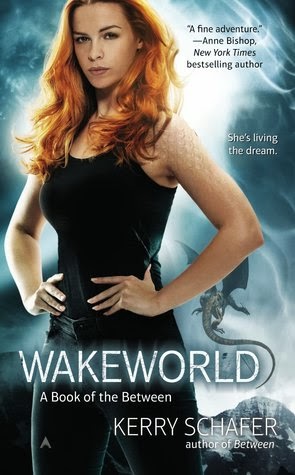