Early Review: A Promise of Fire by Amanda Bouchet 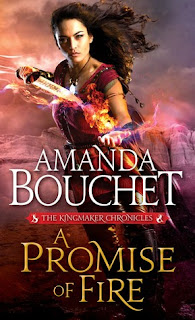 
Catalia "Cat" Fisa is a powerful clairvoyant known as the Kingmaker. This smart-mouthed soothsayer has no interest in her powers and would much rather fly under the radar, far from the clutches of her homicidal mother. But when an ambitious warlord captures her, she may not have a choice…

Griffin is intent on bringing peace to his newly conquered realm in the magic-deprived south. When he discovers Cat is the Kingmaker, he abducts her. But Cat will do everything in her power to avoid her dangerous destiny and battle her captor at every turn. Although up for the battle, Griffin would prefer for Cat to help his people willingly, and he's ready to do whatever it takes to coax her…even if that means falling in love with her.


I'm so mad at myself for reading A PROMISE OF FIRE early. Why? Because I LOVED it and now I have to wait even longer to continue the story with book two. January 2017 can't get here fast enough.

Cat is a huge mystery at first, but slowly her layers are pealed away and her secrets are revealed. I didn't love Griffin at first. I didn't like that he basically kidnapped Cat and held her against her will for his own gain. Slowly you start to see who he really is and there is definitely more to his decisions than appear.

The romance is an important part of A PROMISE OF FIRE, but it's more of a dessert, the characters and storyline are the main course. Griffin's Beta team quickly became an essential part of the story and I loved the way Cat became part of their team. I loved the way everyone interacted even during the tough times.The world is well written, I felt like I was in the world as the story was told. I have so much more to say, but I don't want to ruin anything for you.

As I said, I loved A PROMISE OF FIRE and I am very excited to see where Amanda Bouchet takes Cat and this story next. Crossing my fingers that I will get my hands on an advanced copy of BREATH OF FIRE.