Review: The Kiss of Deception by Mary E. Pearson 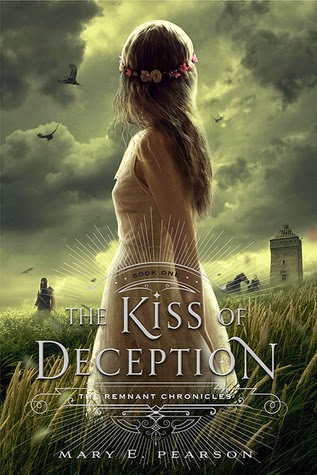 
In this timeless new trilogy about love and sacrifice, a princess must find her place in a reborn world.

In a society steeped in tradition, Princess Lia’s life follows a preordained course. As First Daughter, she is expected to have the revered gift of sight—but she doesn’t—and she knows her parents are perpetrating a sham when they arrange her marriage to secure an alliance with a neighboring kingdom—to a prince she has never met.

On the morning of her wedding, Lia flees to a distant village. She settles into a new life, hopeful when two mysterious and handsome strangers arrive—and unaware that one is the jilted prince and the other an assassin sent to kill her. Deception abounds, and Lia finds herself on the brink of unlocking perilous secrets—even as she finds herself falling in love.


Lia wants nothing to do with her planned marriage. Instead of walking down the isle she flees in her wedding attire with her best friend for a distant village and a new life. Little does she know that her intended followed her to her new life, he's hiding in plain site, and just might have stolen her heart along the way.

THE KISS OF DECEPTION was so much more than I was expecting. Although it is told in more than one POV at times, you mainly follow Princess Lia. Lia is determined to live her life the way she wants instead of being her fathers pawn. She does a really good job of taking care of herself and her friend as they journey to freedom from her old life. I found her to be down to earth and in no way stuffy like you would expect a princess to be.

There is a bit of a love triangle going on in THE KISS OF DECEPTION. We have the Prince who wants to meet the bride who didn't want him. He does not tell Lia who he is and although he wants to hate her, she is nothing like he expected and he finds himself being drawn to her instead. Then we have the Assassin who was sent to kill her. He also doesn't in any way reveal who he is, finds out she is nothing like he expected and then finds himself hesitating when he has the chance to kill her like he was supposed to.  The triangle and romance is done well and I didn't find myself annoyed with it one bit.

THE KISS OF DECEPTION is 489 pages long and a LOT happens in between those pages and it's only the beginning of the story. I found the pace quick and the reading smooth. I was really able to connect with not only Lia but with the Prince, Assassin and best friend as well. I couldn't seem to put the book down and by the end I was completely and utterly exhausted (in a good way). Any fantasy fan should jump aboard The Remnant Chronicles express.