UFI welcomes Rebecca Maizel Author of The Vampire Queen Series. Thanks for Joining us!!

What did you want to be when you were little?


I was born in the 15th century long before the advent of choice for women. When I was a child my hopes were to live, marry, have children. That's all there was. That and the church.
I lived a hundred lives as a vampire, and none of them were what I wanted. I've always wanted to go back, live, complete the cycle of my life. I've being quote morbid and sad, but it's true!

What was your favorite part of being a vampire?

Seeing the passage of time, watching music change, and technology. Even when I took my hibernation in the 1900s, the world had changed dramatically from 1417. I loved the clothes, though. Corsets, flowing dresses, and gorgeous jewelry! I do miss that.

How do you think your life would have turned out if you had never went out to find your moms earring?

I would have died in the 15th century. But I never would have met Tony or Justin. I wouldn't have met my soul mate, Rhode. It's a funny thing, isn't it? If we could go back and change our fate? Would we? I'm the person I am now because of that choice. If it hadn't happened, would I be better off? I guess that's the thing about life, you really can't go back and change it. Or maybe you can...

While you were a vampire if you could have changed one act what would it have been?

*SPOILER ALERT FOR INFINITE DAYS**
I would not have allowed the coven to kill Tony. I would have done whatever was in my power to stop that. Hopefully one day I can make amends for this.

Who do you consider your best friend? 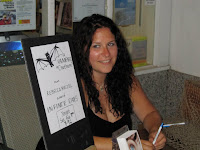 Rebecca Maizel received her B.S. from Boston University and has masters degrees from RIC and VCFA. She teaches literature in her home state of RI. She talks to her Bichon Frise George like he’s a real person. 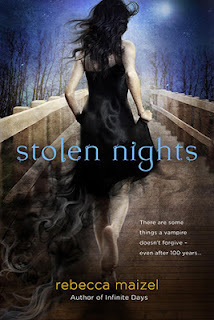 Lenah Beaudonte should be dead. But having sacrificed herself to save another, she finds herself awakening with strange powers that are neither vampire nor human—and a new enemy on her trail. In her vampire life, Lenah had thought that being human was all she ever wanted; but the human heart suffers pain, heartbreak and loss.

With her new powers growing and the dark force of the Nex after her soul, Lenah faces a choice: between the mortal love of gorgeous Justin, whose passion fed her human soul, and taking a different path to become the mistress of her own destiny, wherever that may lead...