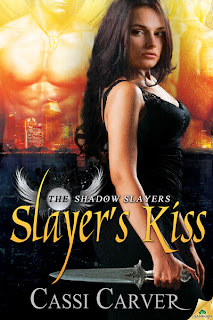 When the past flies in your face, clip its wings.

Kara Reed is a supernatural failure. But where her magic falls short, her fists get the job done. The criminal element doesn’t stand a chance once she hits San Diego’s dark streets. When two smoking-hot tenants move in next door, she thinks her love life might finally be heating up. Just being near Gavin and Julian is enough to make her want to offer her body on a platter.

Gavin and Julian know it’s only a matter of time before the truth comes out. They’re fallen angels sent to watch over the king’s daughter, one of the last females of her kind. Trouble is, she doesn’t seem to think she needs watching—unless they’re watching her shimmy out of her clothes.

No matter how tempting her guardians, Kara’s not about to let anything stop her from tracking down a sadistic killer who carves into his victims and leaves them for dead. Even when she realizes her target may be the very scourge of heaven from which her angels swore to protect her...

Warning: Contains a kick-ass heroine with a foul mouth, a kind heart and a raging libido, and two fallen angel warriors who wouldn’t have her any other way. Watch out for sex in the clouds, a magical island of hedonism and a love triangle that gives new meaning to the term "hot-wings".

When Cassi isn’t busy plotting or writing, she enjoys reading, spending time with family and friends, caring for pets, getting outdoors, and watching sappy movies that deliver reliably happy endings.