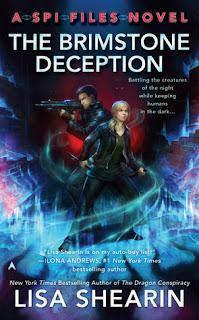 The agents of Supernatural Protection & Investigations (SPI) know that fighting evil is a full-time job, especially when a new designer drug—with mind-blowing side effects—hits the streets...

It’s called Brimstone. And after the first few hits, you’ll see every supernatural beast sharing the sidewalk, train, or office with you. After that, you’ll start seeing the really scary stuff.

I’m Makenna Fraser, seer for the SPI. And the collateral damage caused by Brimstone is something I’d like to unsee: dead drug dealers missing their hearts—and souls. Because your local pusher doesn’t stand a chance against the new cartel muscling its way into New York. And since the drug can only be produced with magic and molten brimstone fresh from Hell, that means a rift to the underworld is open somewhere in the city.

And when—not if—the cartel loses control of it, well...

It’s going to be Hell on earth.

There have been a lot of different types of bad guys in the SPI Files series and although I don't think any of them will ever live up to the baddies in THE DRAGON CONSPIRACY, I think Shearin did a good job with the ones in THE BRIMSTONE DECEPTION.

The action in this series is just awesome. I know when I open a new SPI Files book, there will be some sort of life or death situation and the getting there won't be disappointing. Mac continues to surprise me with the way she is able to handle the situations she is thrown in. She has a way of adapting to things and it really makes me like her more with each situation she conquers.
I don't need romance with my urban fantasy, but the new 'relationship' with Rake was actually nice to follow. I was a little disappointed when Makenna and Ian decided not to date—because let's face it, they were cute—and didn't really click with Rake at first. He has a much bigger role in THE BRIMSTONE DECEPTION and I found that I enjoyed getting to know him and look forward to seeing him and Mac get to know each other more..

I find myself enjoying this series with each book and I hope that it is long running like Shearin's Raine Benares series.