UFI welcomes Karen Greco Author of Tainted Blood. Thanks for Joining us!!

I am desperately afraid of heights, so the scene in Chapter 1 of Tainted Blood was a tough one for me to get through. Also, I am a Libra!

Is it bad to say that I love watching TV? We are really in a new Golden Age of television and there are some really wonderful shows out there.

Because my schedule is pretty crazy, I don't follow any routine, or else I would never write. I write, or outline, or jot down ideas on buses, subways, while waiting on line. There never seem to be enough hours in the day, so I cram it in wherever and whenever.

There are loads! I love Richard Kadrey. Michael Carey, Kim Harrison. Of course, Ann Rice and Laurell K. Hamilton, who I think of as mentors to all who write urban fantasy/paranormal. Chris Ward is an indie writer that I absolutely adore. His Tube Riders series is terrific.

How would you pitch Tainted Blood to someone who has not heard of it before?

Someone called the Hell's Belle series "Buffy for grown-ups," which is not entirely inaccurate! It's about a half vampire/half witch who is coping with a very real supernatural threat that, more and more, looks like only she is the key to extinguishing. She is dealing with loads of family issues, too, wrapped up with issues of trust. What makes a family? Does family have to be blood related? Can you trust your family? What does it mean if that trust is destroyed?

Can you tell us a little bit about the world that Tainted Blood is set in?

Tainted Blood, and Hell's Belle, are set in the not-too-far future. The idea is that supernatural creatures walk amongst us, and the government agency that Nina and her crew works with—Blood Ops—is around to make sure it's kept that way. They are kind of like a secret police force.

Do you have a favorite scene in Tainted Blood ?

Wow. This is a tough one. I love the opening scene. I love action, I love writing action, and Hell's Belle (the first book in the series) had a ton of it. There is a bit less action in this one, so I find I gravitate to the scenes where Nina's kicking someone's ass.

I love Nina, and I adore writing for Frankie. Those are my favorite characters to write. And they are really great together. I can't say what the hardest one was to write in this book, because it's a major spoiler. But there is one chapter that I still choke up when reading.

I am jugging three (OMG!) book projects right now, including the third book in the Hell's Belle series. I am also working on a stand alone paranormal romance, and I have another stand alone urban fantasy in the outline phase. There are a lot of stories I am aching to tell! 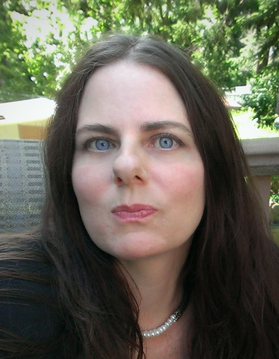 Karen Greco has spent close to twenty years in New York City, working in publicity and marketing for the entertainment industry. Originally from Rhode Island (she loves hot wieners from New York System, but can't stand coffee milk), she studied playwriting in college (and won an award or two).

After not writing plays for a long time, a life-long obsession with exorcists and Dracula drew her to urban fantasy, where she can decapitate characters with impunity.

Her first novel, Hell's Belle, was released in 2013. Tainted Blood is the second book in the best-selling Hell's Belle urban fantasy series. 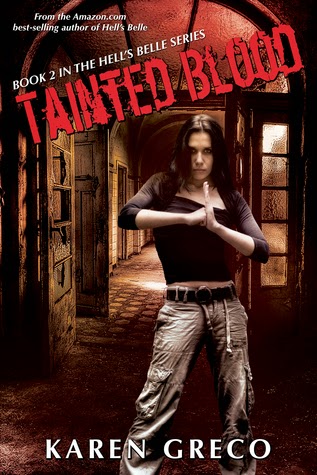 
After surviving a vampire assassin (not to mention an awkward affair with a hot FBI agent that ended worse than she could have imagined), witch/vampire hybrid Nina Martinez is reunited with the full Blood Ops team in Providence, Rhode Island. Her Aunt Babe is tutoring her in all things witchcraft, and her vampire partner Frankie is enjoying the benefits of daywalking, courtesy of a demon spell.

When a segment of the Rhode Island vampire population is marked for death by a tainted blood supply, Nina and her team race to find Patient Zero before the local vampire population is wiped out. But when a demon infestation threatens to take control of the city, Nina must join forces with newly elected mayor—and closet demon— Ami Bertrand before the city falls into ruin.

Filled with fast-paced, edge-of-your-seat action, Nina and her group of supernatural misfits battle a surprising new enemy that threatens their very existence.

No wonder she still can’t get a date.