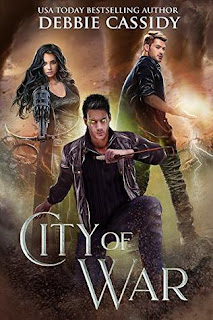 
Triumph always comes at a price, but paying it is a bitch.

With the Voice finally by her side Wila must take the final steps to claiming back what is rightfully hers--a kingdom, a man, and possibly a throne. Now, if only the obstacles in her path would make nice and step out of the way.

The Triumph Games are looming, and only the Arcana Institute can help her forge the final path she needs to liberate her Kindred and all the people trapped under Elora's false rule.

All the pieces are almost in place. All the planning is ready to come to fruition, but hurdles have away of springing up at the last minute, and a trip right now could be fatal.

War may be coming, whether Wila wants it, or not...

A kick-ass urban fantasy with a slow burn Whychoose romance


CITY OF WAR tied the Chronicles of Acana series up in a pretty little bow.

CITY OF WAR was fast paced with a nice battle that ended the major conflict of the series. I enjoyed the twists and revelations the last book brought forth.

It's a good thing that this series was geared more towards urban fantasy than reverse harem because the romance really didn't do much for me.  It's not that I didn't like the guys, it's that the romance portions of the book just didn't make me swoon. And if I'm being honest. I found the romantic relationship between Wila and Sebastian kinda creepy. I mean, they were born together like twins—and I know they technically aren't— and he called Willa's mom mother. It just felt icky to me and I didn't get it and definitely wasn't feeling it.

I wish we would have gotten more from the epilogue. We see that the cast of characters got their happily ever after, but I still kinda wanted to see more of how they got there. Wanting more = a win in my book.