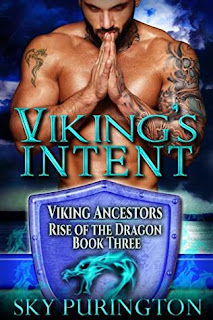 
Part of a burgeoning ancient prophecy, Shea's sole focus is to protect her sisters.

Not become mated to a Viking of her dragon ancestor's choosing. If that happens, she might lose not just her independence but a matchmaking gift that brings people together. A gift at risk when she's kidnapped by a stubborn, frustratingly handsome barbarian who takes her on a whirlwind adventure through tenth century Scandinavia.

Though at odds with the twenty-first century beauty from the moment he meets her, Viking Davyn Sigdir steals Shea away to keep her safe from multiple enemies set on making her theirs. Unfortunately, he underestimates how alluring she can be when it suits her. How feisty and headstrong she is as she tries to outwit him at every turn. Yet the fiery strife between them only draws them closer, and soon their unwanted attraction becomes hard to resist.

Determined to control their own fate, they devise a bold plan to trick their adversaries. One that could keep Shea's matchmaking gift intact plus end the prophecy and ongoing war. All they have to do is get along and not give into temptation which should be simple for two people determined to remain apart. Or so they hope as a passionate high-stakes war of hearts ensues in Viking's Intent.

“What are you doing here?” Davyn growled into her mind.
She blinked at him, only now realizing they must be dreaming together. Wonderful. Not.
“I don’t know.” She frowned. “Didn’t you bring me along?”
“Why would I do that?” He shook his head. “You tend to bring havoc with you wherever you go.”
“Thanks,” she said dryly.
“It’s true.”
“Says you.” She shrugged and spoke without thinking. “I like to think I bring excitement.”
Had that sounded like flirting?
“I do not want excitement with you, Cupid,” he grumbled aloud.
“Any more than I want excitement with you,” she assured as they stood alone in a darkened area covered by pines. “And you definitely dragged me along somehow because I sure as heck didn’t try to follow you.” She shook her head. “The last thing I remember was feeling drowsy then I was here so I must've dosed off.”
“You should not have been able to follow me to this place,” he grunted in dismay, a fierce scowl on his face. “It is too telling.”
She met his eyes, catching his drift. “Nope lose that thought.” She shook her head. “Just because I got dragged along in a dream doesn’t mean we’re fated mates. It’s got to be the magic of this place up to no good.”
“My magic,” he reminded. “And I agree it is up to no good.”
Though she tried to pull her gaze from his, she was suddenly all too aware of his gorgeous eyes despite the darkness. Eyes that seemed to draw her in more than usual in this strange dreamlike state.
“Oh shoot,” she whispered, drifting closer even as she tried to stop, as she tried to gain control. “I don’t think I like this dreaming thing.”
“It is hard to control a dream,” he said softly, his voice less gruff now.
“We’re controlling this dream though,” she denied even as she drifted closer.
“Yes,” he assured, drifting closer as well. “Because we are here to work.”
“To lure the enemies,” she murmured, her eyes falling to his lips.
“That is right,” he murmured, his eyes falling to her lips.
“Right,” she whispered. “This is right.”
“Yes,” he whispered. “It is.”
Then she drifted right into his arms, tilted her head back and closed her eyes, more than ready to be kissed. More than ready to feel once again what those sensuous lips of his could do.
Then air blew by her face, and her eyes flew open.
An arrow had whizzed by their faces moments before their lips touched.
They were under attack.