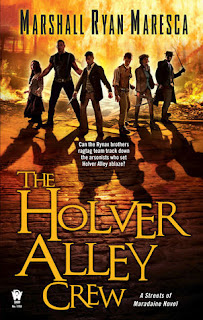 The Hover Alley Crew
The Streets of Maradaine #1


Mixing high fantasy and urban fantasy, The Holver Alley Crew is the first novel of Maresca’s third interconnected series set in the fantasy city of Maradaine-- The Streets of Maradaine

The Rynax brothers had gone legit after Asti Rynax's service in Druth Intelligence had shattered his nerves, and marriage and fatherhood convinced Verci Rynax to leave his life of thievery. They settled back in their old neighborhood in West Maradaine and bought themselves a shop, eager for a simple, honest life. Then the Holver Alley Fire incinerated their plans. With no home, no shop, and no honest income—and saddled with a looming debt—they fall back on their old skills and old friends.

With a crew of other fire victims, Asti and Verci plan a simple carriage heist, but the job spirals out of control as they learn that the fire was no accident. Lives in Holver Alley were destroyed out of a sadistic scheme to buy the land. Smoldering for revenge, burdened with Asti's crumbling sanity, the brothers lead their crew of amateurs and washouts to take down those responsible for the fire, no matter the cost.

Marshall Ryan Maresca grew up in upstate New York and studied film and video production at Penn State.  He now lives Austin with his wife and son.  His work appeared in Norton Anthology of Hint Fiction and Rick Klaw’s anthology Rayguns Over Texas. He also has had several short plays produced and has worked as a stage actor, a theatrical director and an amateur chef. His novels The Thorn of Dentonhill and A Murder of Mages each begin their own fantasy series, both set in the port city of Maradaine. For more information, visit Marshall’s website at www.mrmaresca.com.