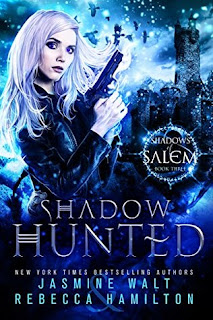 Once a whip-smart detective and a powerful Shadow, Brooke Chandler has been stripped of both memories and identity. She now spends her days scrubbing floors, reduced to nothing more than a servant girl.

But even with no memory of her previous life or how she ended up a slave, Brooke won’t remain trapped for long—not with friends and enemies alike vying to find her.

Her escape attempt lands her in the deadly, beautiful land of Faerie, where nothing is as it seems—possibly including her father, The Winter King. Here, she rediscovers her past life, full of allies and foes all waiting for her return.

Faced with the opportunity to flee, Brooke must decide which fate terrifies her more: staying where her enemies wants her dead, or returning to confront the ones who want her jailed for murder.


Most of SHADOW HUNTED had a much different feel than the other two books in the Shadows of Salem series and I even thought I was reading the wrong series when I first jumped in to it, but I quickly remembered the events at the end of SHADOW MARKED and had no trouble feeling connected to the story after that.

I enjoyed the change in scenery in SHADOW HUNTED. We get to visit the land of Faerie for a nice portion of the book and I liked the characters that were introduced along with it. When Brooke finally made it back to the human world, she actually doesn't spend much time in familiar places. I enjoyed getting to know more about Brook's fae side and meeting some of the people connected to it. I thought that the world and the scenes were nicely set up and well defined.

I wasn't super crazy about the witch portion of the storyline, but I was still entertained. I wish there would have been more Brook and Maddock time, but he still has a lot of groveling to do, so I am OK with waiting until the authors can dedicate their time to making it awesome.