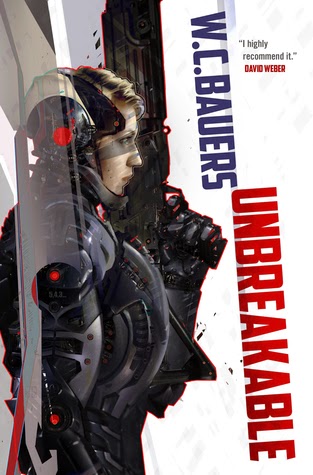 
The colonists of the planet Montana are accustomed to being ignored. Situated in the buffer zone between two rival human empires, their world is a backwater: remote, provincial, independently minded. Even as a provisional member of the Republic of Aligned Worlds, Montana merits little consideration—until it becomes the flashpoint in an impending interstellar war.

When pirate raids threaten to destabilize the region, the RAW deploys its mechanized armored infantry to deal with the situation. Leading the assault is Marine Corps Lieutenant and Montanan expatriate Promise Paen of Victor Company. Years earlier, Promise was driven to join the Marines after her father was killed by such a raid. Payback is sweet, but it comes at a tremendous and devastating cost. And Promise is in no way happy to be back on her birthworld, not even when she is hailed as a hero by the planet's populace, including its colorful president. Making matters even worse: Promise is persistently haunted by the voice of her dead mother.

Meanwhile, the RAW's most bitter rival, the Lusitanian Empire, has been watching events unfold in the Montana system with interest. Their forces have been awaiting the right moment to gain a beachhead in Republic territory, and with Promise's Marines decimated, they believe the time to strike is now.

Fresh air spilled into her upstairs bedroom through an old wooden window. Promise inhaled the smells of an early autumn shower, which normally calmed her, but not today. She scanned her room in frustration. Anyone walking into it might have thought a vandal had tossed it looking for valuables. She pinched her nose and scrunched her eyebrows, just like her father did, then slowed her breathing and counted to seven, just long enough to temper her words. She rarely let her father see her perturbed and had no intention of doing so today.

“Dad! Where’s my comb?” Promise closed her eyes. I really did try not to yell. “You know,” she said as she forced her shoulders to relax, “the one Mamma gave me for my birthday?”

“Right.” The lamp stood alone, a sea of nicknacks swept to the floor beneath it. Promise imagined her father seated in his hardwood desk chair, sighing in resignation. She didn’t even try to keep the edge from creeping back into her voice. “I know it’s not approved by the elders, but it’s from Mamma, and it’s one of the few things I have left.”

“Yes, I know,” Morlyn Gration answered with a maddening degree of patience, but without ceding the point. “Try not to obsess about it.”

“Try some compassion,” she muttered under her breath. Remember, P, he misses her, too—cut him some slack. Just not too much.

Promise knew her father was hard at work and that she had interrupted him over what he considered to be a trivial matter. She pictured his study vividly: a modest flattop desk, on the right of which sat a pad of paper and a gravity-fed pen because Morlyn Gration refused to use a smartpad or a sensible backup. Rows of calculations foretold the size of the coming harvest and the profits it would net. On a shelf above his head sat a seldom-used book of genealogy. Behind him stood a narrow shelf of books neatly filled with volumes on herbals, horticulture, and husbandry. All very boring in her opinion.

Her family was small and proud. They’d come to the planet Montana many generations ago, on the tail end of the Third Diaspora, which had come to a close with Earth’s death. As planetary deaths went, it had been a particularly bad one. Time reset itself, A.E. this time instead of C.E., to keep the homeworld’s memory alive, of course. But after one hundred years, no one cared anymore.

The lucky ones had left before “The Event,” drawn to Montana by its distance from Holy Terra and their separatist Luddite zeal… and just in time, too. Thank God.

After landing, the Grations migrated to Montana’s northern hemisphere, to a parcel of land along the foothills of the Fhordholm mountain range, only a day’s hike from the tree line. They saw four seasons and winters that dipped deep into the minuses, lived close to the land, and dabbled in tradecraft. In less than a generation, harsh Montana winters took their toll, the deaths mounted—so many children, lost unnecessarily—and time-honored traditions crumbled to dust. The Grations became reluctant technophiles of a sort. And why not? That’s what mechs were for, after all. Let them grunt it out for a change. Let the children live.

Big surprise, Promise thought as she kicked a pile of clothes in frustration. Not that using mechs bothered her. It didn’t. But it was the principle of the matter, which brought her back to the comb. He sees the value of machines. I wish I could ask Mom why she fell for him. Dad can be so… so… stubborn! Can’t he see how much this means to me?

Promise gave up her search. She walked to her closet, reached up high, and grabbed the handgun and holster off the top shelf, making both disappear. She walked down the hall and descended the stairs, which emptied into a plain room. A few solid pieces of furniture hugged the walls, which supported several acrylic landscapes, soft pastorals full of greens and yellows and browns. Her father’s rocker sat near a bricked fireplace. Her mother’s leather armchair faced to the east. Mount Kinley stood in the distance, a purple dome that had once topped five thousand meters before it blew its top.

“Be back for lunch,” yelled her father.

“Don’t plan on it,” Promise shouted back.

She was already halfway to her ride when she heard the screen door slam shut behind her. Promise swung her leg over the sled and felt her hands mold to the polymer grips. A green light on the steering console came to life and scanned her eyes. Then the sled rose on a platform of countergravity.