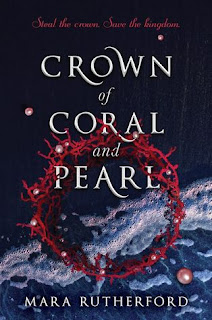 
For generations, the princes of Ilara have married the most beautiful maidens from the ocean village of Varenia. But though every girl longs to be chosen as the next princess, the cost of becoming royalty is higher than any of them could ever imagine…

Nor once dreamed of seeing the wondrous wealth and beauty of Ilara, the kingdom that’s ruled her village for as long as anyone can remember. But when a childhood accident left her with a permanent scar, it became clear that her identical twin sister, Zadie, would likely be chosen to marry the Crown Prince—while Nor remained behind, unable to ever set foot on land.

Then Zadie is gravely injured, and Nor is sent to Ilara in her place. To Nor’s dismay, her future husband, Prince Ceren, is as forbidding and cold as his home—a castle carved into a mountain and devoid of sunlight. And as she grows closer to Ceren’s brother, the charming Prince Talin, Nor uncovers startling truths about a failing royal bloodline, a murdered queen… and a plot to destroy the home she was once so eager to leave.

In order to save her people, Nor must learn to negotiate the treacherous protocols of a court where lies reign and obsession rules. But discovering her own formidable strength may be the one move that costs her everything: the crown, Varenia and Zadie.


I really enjoyed the idea of CROWN OF CORAL AND PEARL when I read the blurb and had no trouble getting into the story.

The storyline in book one of the Crown of Coral and Pearl series was unique. I really enjoyed the village that Nor lived in and I enjoyed learning about their days there. The bond between the sisters was strong and beautiful to watch. The land portion of the storyline wasn't my favorite location wise, but the pace did pick up some and a lot of danger was introduced.

The ending didn't do much for me. Not a lot about it surprised me, it added more questions to other things I was waiting for answers too and just didn't feel like a smooth wrap up.

Although I didn't totally fall in love with CROWN OF CORAL AND PEARL I would still read more. I will be on the lookout for book two.