Review: A Kiss of Blood by Pamela Palmer 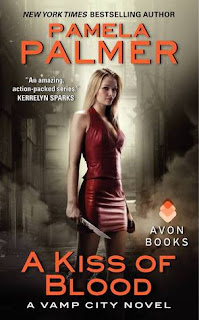 Only one woman can save Vamp City...

One of the few humans who managed to escape the deadly twilight world of Vamp City, Quinn Lennox vows to never return. But the vampires want her back, for only she has the power to renew the magic of their crumbling world and free the vampires trapped within.

When the dangerous and all-too-seductive Arturo Mazza comes for her, Quinn knows she can never trust him after the betrayal she suffered at his hands. But with her beloved brother's fate hanging in the balance, and her own power beginning to emerge, she chooses to risk all on yet another perilous journey back to Vamp City. And though she tries to deny it, her heart begins to hold hope that even a ruthless vampire can learn the meaning of true love.


Right off the bat I can tell you I enjoyed A KISS OF BLOOD more than A BLOOD SEDUCTION. To recap I found Arturo and his dual persona's akin to experiencing whiplash and the ending left me disappointed. I enjoyed the world and most of A KISS OF BLOOD takes place in Vamp City so I enjoyed that aspect of both installments.

I enjoyed Arturo a lot more in book 2. He was not up and down with his personality nor was he sneaky like before. You could 'feel' that he was genuinely interested in Quinn not just playing her. He still has more work to do on himself but he is coming along and I am liking him much more. I liked how Quinn stood up for herself more in A KISS OF BLOOD. She knew what she wanted and stuck to her guns for the most part. There is a lot of sadness revolving around Quinn's brother. He is dying and we find out some more about his involvement in the story. The new characters brought an interesting addition to the story. It shows a different side to the creatures living in Vamp City.

A KISS OF BLOOD was not as dark as book 1 and had a little more romance thrown in. I am glad I gave book 2 a chance. I enjoyed it and it made me interested in continuing the series.