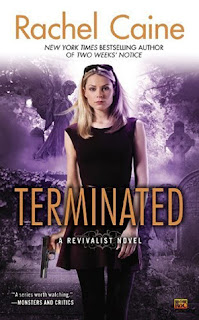 
The end of TWO WEEKS NOTICE left Bryn and Riley dosed with improved version of  Returné. The new version is like a ticking bomb that is just waiting to go off. Bryn and her allies are running from assassin's and trying to stay alive while trying to find a way to kill Jane once and for all.

This is another character driven series in my opinion. Each one brings something new and not one of them is unaffected by events at any turn. Bryn's background has helped her to stay strong and get through things no average person would be able to handle. Patrick surprises me with his protectiveness at every turn. Bryn and Patrick work well together but have a lot to work through. Joe is just awesome. He does not have to be there yet he is right by Bryn and Patrick's side at every turn. He has his own struggles to work through in TERMINATED and I was super proud of the way he handled himself. Riley is a big mystery most of the time. I never knew where she stood at any given moment and that made me nervous. Manny and Pansy I think shocked me the most in TERMINATED. Especially Pansy. I don't want to get too much into it but Pansy goes above and beyond and I was surprised at how much she cared about what happened to people.

The ending was very satisfying. Bryn was extremely brave in her decisions and her willingness to do what most would not. I felt like everything was wrapped up nicely and everyone that should have been there at the end was there. Great end to a great series. What will Rachel bring us next?