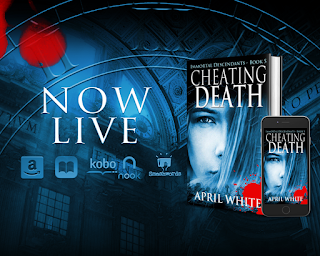 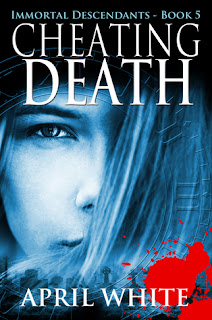 
In the thrilling conclusion to The Immortal Descendants series, a life has ended, the future is lost, and a war has just begun.  An explosion has split Time and Archer has paid the ultimate price, leaving Saira heartbroken and desperate to repair the rupture. But the blast has trapped Saira in an alternate future where Mongers are cornered predators and Death is the ultimate judge. If Saira and her larcenous friend, Ringo, ever want to see Archer alive, they must pull off the impossible – alter history at a moment in time to which they cannot return. But saving Archer will restore a timeline where Mongers have complete control, mixed bloods are hunted prey, and the Descendant world is spiraling into chaos.
As Saira uses her Clocking skills to prevent her worst nightmares from coming true, she travels from the dirty streets of Victorian London to the secret archives of the Vatican. She seeks a purpose that is greater than smashed hope, greater than lost love, greater than the prophecy that has shaped her very existence. She must use the lessons of history to free the present and shape the future. And in the end, Saira and her friends will face War and Death in the most important battle of all – the one for Peace. 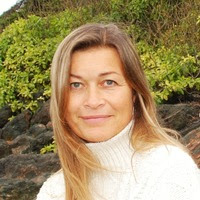 APRIL WHITE has been a film producer, private investigator, bouncer, teacher and screenwriter. She has climbed in the Himalayas, survived a shipwreck, and lived on a gold mine in the Yukon. She and her husband share their home in Southern California with two extraordinary boys, their dog, various chickens, and a lifetime collection of books.

All four books in the Immortal Descendants series are on the Amazon Top 100 lists in Time Travel Romance and Historical Fantasy. 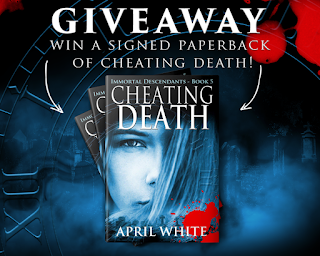