UFI welcomes Author Susan V. Vaughn. Thanks for Joining us!!

I take the inspiration for my books from everyday life. The first contemporary romance series I wrote was based on a story I read about a mother of three who struggled with addiction. I remembered being touched by her story and questioning what life would be like for her three children after they grew up. Would they be happy? Would they be able to lead normal lives? Would any of them become parents too? It’s curiosity that leads to creativity. An author is more than a storyteller, they are also a detective, and a therapist.

Before I wrote Love Detour, I was watching a documentary on TV about a woman who possessed psychic abilities. She could see and communicate with ghosts. She claimed that sometimes when people died they had a hard time moving onto the other side and would find people like her to leach onto. She had one ghost who wanted to connect with his son, and after some research, she was able to find the boy and convince him to meet her. I was skeptical watching their meeting. I kept thinking the woman was trying to pull over a fast one on this poor innocent boy. But that was not what happened. Instead, the woman connected with the boy and told him things only his father could know. She brought the boy peace. After the documentary finished my mind kept going. I thought about what it would be like to be able to see and communicate with ghosts. I thought about what it would be like to connect to a loved one through a stranger. How would I feel? Would I be able to believe a stranger and find peace? Would my life be better because of that connection?

As an author, I always have my eyes and ears open. I watch the world unfold around me and connect to others empathetically. I ask questions, constantly, and try to dig deeper. What makes a person the way they are? How would I feel if I were in their shoes? Writing is not just a creative process it is about discovering a life outside your own.

Romance Author, Susan Vaughn understood the meaning of sarcasm before she could walk. Her childhood in the suburbs of Detroit was spent mainly trying to outwit her six creative siblings. When she wasn’t working on the next soul-crushing jab, she sharpened her imagination on romantic literature and day dreamed about her knight in shining armor.

It didn’t take long for this hairdresser by trade to turn her passion for reading romances into writing her own unique love stories. Susan lives her life finding laughter in all situations, and delights in marrying sarcasm with romance to create realistic falling-in-love stories in the unlikeliest of scenarios.

Susan lives on the shores of Lake Huron with her real life knight in shining armor and enjoys watching their three children learn the art of sarcasm and wit. 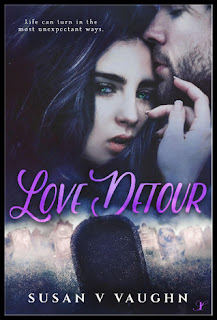 
Life can change in the most unexpected ways.

Ashlyn Montana had encountered ghosts her whole life, but none more charming or irresistible than Bob Abbott. From the moment the fatherly figure floated into her life, she knew she met a friend she could trust. Pressured by her family to marry young, Ashlyn takes Bob’s advice and goes on the run in disguise. But when he talks her into taking a job in Breaker Creek as a farm boy named Al, she becomes suspicious. Did her ghostly pal lead her to freedom, or entangle her into his past?

Hunter Abbott had no idea what he was getting into hiring the clueless and scrawny farm boy, Al. But he felt for the kid. There was a time he was once a lost boy looking for a place to belong, until his Uncle Bob took him under his wing. But when Hunter tries to help guide Al into a farmer it leads to a shocking discovery. His new hire is hiding an unbelievable secret. And Hunter is about to face a reality he never thought possible.

Can the two people Bob Abbot loves most, find love as they work to solve the mystery of his murder?

“So what?” Al challenged back. His voice had gone up in pitch again, and his eyes were blazing with anger. “You’re not the boss of everything I do.”
He crossed his arms over his chest. If Al wanted to fight with him like a man, then he had better be ready to act like one. “I pay you, feed you, and give you a place to live. And as long as I do all three of those things what I say goes.” He leaned close and lowered his voice. “Now go take a shower, change your clothes, and join our guests for dinner.”
Al turned his head to the left of him and stuck out his tongue.
Hunter grabbed him by the front of his overalls and pulled him up into the air so that they were face to face. “Now you’re sticking out your tongue at me?”
“Not at you,” the boy squeaked, fighting Hunter’s grip.
“Then who are you giving that look too, kid?” He gave the boy one gentle warning shake, before lowering him back to his feet. “I’m the only person standing in this room with you.”
Al looked down at his boots, refusing to answer. And just like that, Hunter snapped again. He grabbed onto the boy’s arm firmly, and repeated, “Who are you giving that look to?”
“Nobody.” Al tried to pull his arm back and got nowhere. He glanced up at Hunter with desperation, and his eyes were so startling green at that moment—his lashes so long, his cheeks so pink—he looked exactly like a woman.
Hunter dropped the boy's arm and took several steps back.