UFI welcomes Daniel Marks Author of Velveteen. Thanks for Joining us!!

I guess what may not come across between my public appearances, my Youtube channel and my twittering, is that I lead a pretty solitary life. I live in a very small town (we don’t even have a grocery store) and I rarely go anywhere or see anyone but my wife and the barista at our Starbucks (yes, no grocery store, but two Starbucks, this is Washington, so…). God. I sound like a shut-in.

I love having a receptacle for all my weird thoughts. And I have a lot of them. There’s this other thing, too. There’s a moment where you get lost in a story and it’s sort of like auto-writing. The words just flow out and it must be the closest a writer gets to having a split personality, to letting an alter take over and just talk. I was a psychotherapist for twelve years and with writing, I’m closer to understanding fugue states than I ever was in discussing symptoms.

I love Brenna Yovanoff’s THE REPLACEMENT, Andrew Smith’s THE MARBURY LENS and Dia Reeves’ BLEEDING VIOLET. All three are examples of just how far the genre can be pushed into the weird. I love any author that casts aside the derivative and shoots for something truly unusual.

Do you have a favorite scene in Velveteen?

I do. There’s a scene set in the gas bellows of purgatory, a gigantic chamber that draws in the gas that powers the lighting for the city. The more damaged citizens hang out inside and huff the gas to get high. Logan, one of the twins, is an addict and Velvet has to pull him out of this place. It’s both sad and speaks to Velvet’s character but it also reminds me of a trip I took with my mother to deal with my uncle’s death, set up his cremation, and all the stuff that comes with that. We needed a break and drove out to the Biodome outside of Tuscon, which is where I stood inside a bellows like the one I describe in the book. It was huge and hollow and, oddly, sad. The place has an aura of failure about it, but it’s impressive at the same time. Moving juxtapositions are my favorite part of this life.

Logan, for that reason right up there. The actual account of Velveteen’s death, which is recounted very vaguely and slowly throughout the course of the book, was the most difficult. I had to restrain myself from just blurting it out in gory detail. That wouldn’t have suited the book or served the characters well at all.

Daniel Marks writes young adult horror and fantasy, spends way too much time glued to the internets and collects books obsessively (occasionally reading them). He’s been a psychotherapist for children and adolescents, a Halloween store manager, and has survived earthquakes, volcanoes and typhoons to get where he is today, which is to say, in his messy office surrounded by half empty coffee cups. He lives in the Pacific Northwest with his wife, Caroline, and three furry monsters with no regard for quality carpeting. None. Velveteen is his debut YA fantasy (Delacorte/Random House Kids). Follow the author on Twitter: @dannymarksya Check out his Youtube channel! youtube.com/dannymarksya 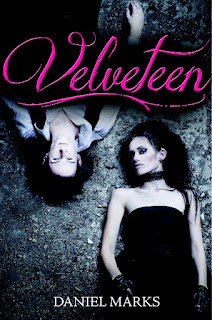 
Velveteen Monroe is dead. At 16, she was kidnapped and murdered by a madman named Bonesaw. But that’s not the problem.

The problem is she landed in purgatory. And while it’s not a fiery inferno, it’s certainly no heaven. It’s gray, ashen, and crumbling more and more by the day, and everyone has a job to do. Which doesn’t leave Velveteen much time to do anything about what’s really on her mind.

Velveteen aches to deliver the bloody punishment her killer deserves. And she’s figured out just how to do it. She’ll haunt him for the rest of his days.

It’ll be brutal... and awesome.

But crossing the divide between the living and the dead has devastating consequences. Velveteen’s obsessive haunting cracks the foundations of purgatory and jeopardizes her very soul. A risk she’s willing to take—except fate has just given her reason to stick around: an unreasonably hot and completely off-limits coworker.

Velveteen can’t help herself when it comes to breaking rules... or getting revenge. And she just might be angry enough to take everyone down with her.