UFI welcomes Jane Kindred Author of The Fallen Queen. Thanks for Joining us!!
You Got Your Urban Fantasy in My Epic!

I didn’t start out writing an urban fantasy. The Fallen Queen was supposed to be 100% epic fantasy, set in a mythical celestial city called Arkhangel’sk. It was a name I took from the Russian seaport on the White Sea after coming across it while Googling Russian names for angels. My Arkhangel’sk was going to be patterned after late-Victorian-era St. Petersburg, with an angelic heroine based on the real-life Anastasia.

My celestial epic fantasy was moving right along as planned…until my angel fell.

As most writers will admit, we are rarely in control of our characters, and from the moment I created the demon Belphagor, the inmates were running the asylum. He had no intention of remaining in the sterile Heaven I’d put him in. No sanitized St. Petersburg would do for him; he wanted the real thing. And he was dragging my innocent angel with him.

Though he insists otherwise throughout the series, Belphagor loves all things Russian, and his passion for it was infectious—so much so that I found myself spending a summer in St. Petersburg living with a Russian family. After that magical visit, there was no way the former capital of the Russian Empire could have anything other than full character status in The Fallen Queen.

Modern cities are at the heart of urban fantasy, the lure of their dark streets and danger inherited from detective novels and film noir, and blended with the magic of creatures straight out of Gothic horror and Victorian penny dreadfuls. 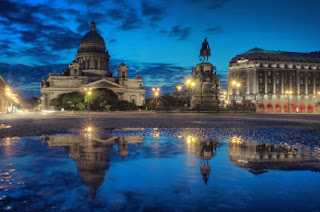 Of course, there aren’t a lot of dark streets in St. Petersburg in the summer. During the five weeks I spent there, it never really reached full dark. But the White Nights provide their own surreal and magical backdrop. Everywhere you go, the present seems superimposed over the past, as if the ghosts of the murdered Romanovs walk beside you, mingling with the souls of writers like Pushkin, Dostoevsky, and Anna Akhmatova—and so many other artists who’ve walked its streets. Though it’s not the sort of place where vampires would spend the summer, my demons were right at home.

My angel, Anazakia, brings her own entourage of ghosts with her to St. Petersburg, as its past seems to echo her present. She isn’t the typical urban fantasy heroine. She falls from the more traditional fantasy world of the Heavens into the stark reality of modern-day Russia, at once hauntingly familiar to her and utterly foreign. But Russia weaves its spell on her, as do the purely earthly spirits she encounters there.

Like Anazakia, I wasn’t expecting to land in Russia and fall in love with it, but I’m glad my characters had other ideas. Will the blend of subgenre sensibilities in The Fallen Queen appeal to the tastes of readers expecting one or the other? I hope so. What do you think? Do you mind if someone gets their epic fantasy in your urban?
__________________________________

Jane Kindred began writing romantic fantasy at the age of 12 in the wayback of a Plymouth Fury—which, as far as she recalls, never killed anyone…who didn’t have it coming. She spent her formative years ruining her eyes reading romance novels in the Tucson sun and watching Star Trek marathons in the dark. She now writes to the sound of San Francisco foghorns while two cats slowly but surely edge her off the side of the bed. Jane is the author of The Devil’s Garden (Carina Press/June 2011) and The Fallen Queen (Entangled Publishing/December 2011), Book One of The House of Arkhangel’sk trilogy.
__________________________________
Find Jane and her books
Website / Twitter / Facebook
__________________________________ 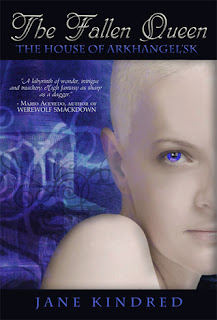 Heaven can go to hell.

Until her cousin slaughtered the supernal family, Anazakia’s father ruled the Heavens, governing noble Host and Fallen peasants alike. Now Anazakia is the last grand duchess of the House of Arkhangel’sk, and all she wants is to stay alive.

Hunted by Seraph assassins, Anazakia flees Heaven with two Fallen thieves—fire demon Vasily and air demon Belphagor, each with their own nefarious agenda—who hide her in the world of Man. The line between vice and virtue soon blurs, and when Belphagor is imprisoned, the unexpected passion of Vasily warms her through the Russian winter.

Heaven seems a distant dream, but when Anazakia learns the truth behind the celestial coup, she will have to return to fight for the throne—even if it means saving the man who murdered everyone she loved.

I am going to start out by admitting that I am not a fan of the books cover. I was hesitant to read the book because the cover and I'm glad I was contacted to review it and looked into it a little more or I would have never picked up THE FALLEN QUEEN. I also usually tend to tray away form books on Angels and Demons but the blurb was interesting enough to catch my eye. I'm not big on religion and stuff in my Fantasy so Im happy to report that the book was not all religion and bible like.
In THE FALLEN QUEEN the Angels represent the noble class and Demons are part of the low level class.  Anazakia is part of the ruling family and one night while she was out her whole family was slaughtered by her cousin. She ends up being hidden away and taken to earth (becoming fallen) by Belphagor and another low class fallen. There journey into hiding is long, dangerous and exhausting as they are left hiding at ever turn from the new evil that has taken Anazakia's rightful place in heaven.
I felt that Jane did a great job with conveying the emotions in all situations that Anazakia and her companions face. The world building was imaginative and well executed. The plot full of Action, adventure, love, loss and suspense. A lot happens from the start to the end of the book and I did not find myself getting bored. There were some points that I was a bit confused about the events that were taking place or who was supposed to be doing what but It was easy to get back on track before to long. Azazakia still has a long road ahead of her by the end of the book and I will be following along with MIDNIGHT COURT when it comes out.
I gave it 3.5/5 stars
__________________________________

FILL OUT FORM TO ENTER
Read more »
Posted by StacyUFI at 3:00 AM 13 comments: