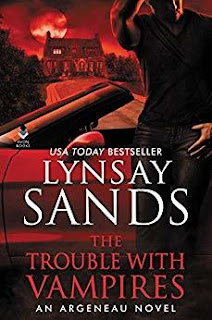 For close to three thousand years the imposing, impossibly handsome Santo Notte has fought in armies across the world and battled his own, more personal enemies. Of all the places he might expect to encounter his life mate, a quiet corner of upstate New York doesn’t seem likely. But as soon as he makes contact with history professor Petronella Stone, while hunting down a suspected rogue immortal, he knows that she will be the greatest adventure of his eternal life.

He expects her to be surprised, confused, even overwhelmed. What he doesn’t expect is that Pet has a secret history of her own. There’s no mistaking the mind-blowing, mutual pleasure they share. But as Pet struggles to protect her nephew from a danger lurking too close to home, Santo realizes there’s another threat to her safety—him. And claiming their passionate future will be impossible until he leaves his past behind, forever… 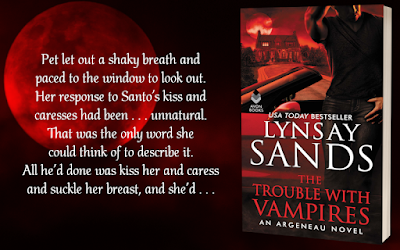 
Prologue
“911. What’s your emergency?”
“Hi . . . um . . . I’m not sure if I should be calling you or the police.”
“Is this an emergency?”
“It might be. I’m not sure . . .”
“Just tell me what’s happening, son. Is someone there sick or injured?” When the boy didn’t respond at once, the operator asked, “Are your parents arguing and it’s scaring you? Are they getting violent?”
“No! No. It’s our neighbor. Well, not really our neighbor, but his cousin who’s visiting. He . . . er . . . he’s sick . . . I think.”
“You think?”
“No. He is. He’s sick. And I think he may be dangerous. I’m afraid he’ll hurt Mr. Purdy.”
“Mr. Purdy?”
“My neighbor.”
“Right. And you think this cousin who is visiting him is sick and dangerous?” the operator asked, doubt obvious in her voice. “If so, why hasn’t this Mr. Purdy called instead of you?”
“I’m worried maybe his cousin won’t let him.”
There was a long pause, and then the operator sighed and asked, “What kind of sick is dangerous, son?”
“He . . . er . . . I think he might be suffering from Renfield syndrome.”
“From what?”
“Renfield syndrome,” the young voice repeated reluctantly.
“What’s that?”
“It’s . . . er . . .” The boy paused, and when he continued, there was a grimace in his voice. “It’s a sort of vampire personality disorder. The—”
“Vampire!” the 911 operator squawked. “You think your neighbor’s a vampire?”
“No! No, I think his visiting cousin thinks he’s a vampire. That’s what Renfield syndrome is and—”
“Honey, there is no such thing as vampires,” the 911 operator said over the boy’s explanation.
“But he—”
“There’re no buts here, kiddo. You need to cut the nonsense and get off the phone. You can get in a lot of trouble for crank calling 911. There are real people out there who need help and calls like this might prevent them getting through. Someone could be dying while you’re wasting our time with this prank.”
“This isn’t a prank,” the boy said earnestly. “I really think he thinks he’s a vampire. He has fangs and—”
“And I really think you need to stop watching horror movies and take yourself to bed. I’m writing down your number, boy, and if you call again, the police will be dispatched to your house and they could arrest you for this. Don’t call again.”
A sharp click sounded. It was followed by a dial tone.

LYNSAY SANDS is the nationally bestselling author of the Argeneau/Rogue Hunter vampire series, as well as numerous historicals and anthologies. She’s been writing stories since grade school and considers herself incredibly lucky to be able to make a career out of it. Her hope is that readers can get away from their everyday stress through her stories, and if there’s occasional uncontrollable fits of laughter, that’s just a big bonus. Please visit her on the web at http://www.lynsaysands.net.

To celebrate the release of THE TROUBLE WITH VAMPIRES by Lynsay Sands, we’re giving away a paperback copy of Vampires Like It Hot!

GIVEAWAY TERMS + CONDITIONS:  Open to US shipping addresses only. One winner will receive a paperback copy of Vampires Like It Hot by Lynsay Sands.  This giveaway is administered by Pure Textuality PR on behalf of Avon Romance. Giveaway ends 5/5/2019 @ 11:59pm EST. Avon Romance will send the winning copies out to the winner directly. Limit one entry per reader and mailing address.  Duplicates will be deleted.