UFI welcomes Marnee Ann Kirk Author of Goddess on the Run. Thanks for Joining us!!


Today’s Vision of The Goddess

First, thank you so much for letting me come play on your blog today. I am so happy to be here talking about something as exciting as today’s vision of the goddess. What a great topic! I must confess, right now, this is a hot topic for me. I love exploring new-to-me ideas, philosophies, and religions—so, discuss some ideas, shall we?

When you hear the phrase, “the goddess,” what are the first two words that come to mind? Wiccan? Mythology, maybe? Power?

If you had talked about the goddess when I was young, I would have pictured Aphrodite, the Greek goddess of love. I was raised in a conservative protestant household, though, and was only exposed to Greek mythology through Clash of the Titans or Star Trek. And, let’s face it, in the 1981 movie, Clash of the Titans, Ursula Andress (Aphrodite) was a lot prettier than Claire Bloom (Hera). Who wouldn’t instantly go to Aphrodite as goddess with an actress like Andress playing the part?

In reality, Aphrodite was a lesser goddess, right? Not the most powerful of goddesses. In fact, by the time Aphrodite came around, she was part of the Greek gods and goddesses doing this play of Who is Who on the power list, like an America’s Weekly Top 40. It signaled the fall of the goddess in the majority’s esteem. Then the Greeks lost to the Romans, the Romans took on Christianity, and the gods and goddesses became myths…

I would like to think we are relatively enlightened, as a people. We are learning compassion, tolerance, understanding and a yearning for knowledge. Maybe it’s just there’s more information available to us about different beliefs and customs through history, because of our information system advancements. Whatever the reason, the goddess as an ideal, or part of a spirituality basis, or as a religious icon has grown, I think. She is back in the picture, people are more willing to talk about “what is the goddess?” today than they have been in a long time.

Is it because we are in a place again, where the female is seen as powerful, seen as vital, seen as important to intellectual, spiritual, and physical wholeness? I’d like to think so. I think I’ve always been drawn to the power women wield, just by the nature of being female. When I think of the goddess, and I think a lot of people today think this way, I think power of the feminine. I hope these thoughts and ideas, of women having power, being beautiful and intelligent, sexual creatures who create everything of beauty in this world, I hope this comes across in my novels.

Goddess on the Run has a Celtic mythology flavor to it; but it also celebrates the power of the female in creation and in life. I hope, if you read it, you enjoy the story.

Marne Ann Kirk grew up wild, exploring the vast high deserts and mountains of the West with her family as a child. Marne Ann loved making up stories and, well, lied about just about everything. Thankfully, she grew out of the lying stage...now she calls it story-telling. 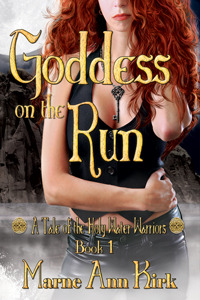 Goddess on the Run
The Holy Water Warriors' Tales #1

All Fomorian Hells are about to break loose on earth, making human souls the daily special, if the Tuatha de Danaan can't stop it.

Teagan, a Celtic demi-goddess hiding from her destiny in small-town Colorado, wants nothing to do with her mother's forgotten realm or the drama of a battle of the gods. And Merric is forbidden fruit she's too smart to taste.

Merric, leader of the Tuatha de Danaan warriors, has other plans. Teagan holds the key to salvation, for both him and their worlds, whether she wants to or not. He'll do whatever it takes to convince her of her duty.

But can he find the key to her heart?

Teagan has been on her own for a while. She wants nothing to do with her mother or her destiny. On top of that she isn't only hiding herself and when the Tuatha de Danaan warriors finally catch up to her she has a lot of explaining to do.

I had absolutely zero trouble getting into GODDESS ON THE RUN. From the first chapter the book was full of action, snark and a bad ass alpha female not taking crap from an alpha male. Katie was easy to enjoy and I loved all the twists and turns that were thrown out involving her. You will have no clue about what I'm talking about until you read the book but the shower scene cracked me up. There is so much build up to the moment and for Teagan to react the way she did had me smiling, wincing and laughing out loud. The plot was great and had a nice easy flow to it. The secondary characters were fun to meet and played a nice part in the story as a whole. I'm really hoping that the other books in the series will feature Teagan again. I enjoyed getting to know her and I want to know what will happen with her next but I have a feeling the focus will be on someone else =( Either way I'm going to read on and im sure I will enjoy it as much as I enjoyed GODDESS ON THE RUN. 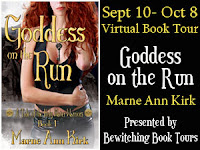