UFI welcomes Author Anton Strout . Thanks for Joining us!! 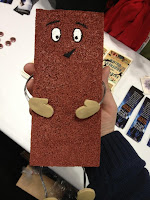 I have a deep, unnatural love of the movie Strictly Ballroom.  I also love roller coasters and once drove 11 hours from New York City to Cedar Point in Sandusky, Ohio because they have some of the best record holding steel and wooden coasters.  Totally worth the trip.  And lastly, I have a sushi eating problem.  I must eat ALL THE FISHIES!

I do not understand this “down time” of which you speak.  Is there perhaps a store I can purchase some at?

Right now I am writing at negative time to write in a week.   There’s my day job with Penguin Random House.  There’s promoting the launch of Stonecast..  There are the sixteen week old twins.  There’s want of sleep.

These aren’t complaints, mind you.  Just one of those critical mass times of year…. When I do get a little time off, I love to crack out on graphic novels, books, and video games.  I wish I had time for more guitar or to play more Dungeons & Dragons, but staring at the Wonder Twins for hours makes up for all that…

Then there are all the other project ideas floating around my head….

What is your Favorite part of writing?
My favorite part of writing is having written.  When it’s done, there is immense relief.  You type “the end” and DONE!  Well, an author never really thinks a book is done.  Even after it’s gone to press, you’re still thinking of things you wish you could tweak a bit more.  For a book to come out, I suppose there’s “done enough.”

Actually, I think my favorite part of writing is when I see all the pieces of the jigsaw puzzle that my work in progress is come together.   Everything starts to click together, make sense, and the journey of faith I took in writing scene after scene begins to pay off.
That’s the best.  It’s the moment where I realize that after seven books I might have the inkling of an idea of what I’m doing.

Does drinking the blood of the living count?  Actually, never mind… that’s more of a ritual than a routine, really.  I have a lot of little routines to get the words down.  I’m a tech nerd, so I outline in Excel to keep track of the order of things going down in the book.  I hand write in a notebook every day, and in the evenings I get a quick editorial pass on those words when I type them in.  If I’m writing a fight, I probably have The Matrix soundtrack on or The Crystal Method playing.

Diana Rowland does a great white trash zombie series… Kevin Hearne has the excellent Iron Druid series… but I REALLY cut my teeth on Laurell K. Hamilton’s Anita Blake, Vampire Hunter series.  I read like nine in a row over a few short months before needing a break.  Those early books reminded me of old time pulp page turners… just with monsters.  I also enjoy the quirky Christopher Moore, who I occasionally seem to have the same idea as, but he usually beats me to the punch.

How would you pitch the Spellmason Chronicles to someone who has not heard of it before?

Actually, girl sculptor in Manhattan (Alexandra Belarus) meets a gargoyle (Stanis) who had been set centuries ago to watch over her family.  She also learns that their true family business isn’t real estate.

Also, the magical side of New York City we first learned of in book one, Alchemystic, was just the tip of a Titanic-sinking iceberg.

Can you tell us a little bit about the world that the Spellmason Chronicles is set in?

The series takes place in modern day Manhattan, the world seemingly much like our own.  The average Joe on the street has no idea that there is a paranormal world.  Hell, the main characters of the book have barely discovered that magic and alchemy exist.  Although I suspect that Stanis, our other narrator (oh, and a gargoyle) has a clue.

Spellmasonry itself is the long lost art of fusing stone with magic, a skill that Alexandra Belarus has only discovered is her family’s true legacy.  With Stonecast, we learn more about how much magic potentially does exist beyond the small fragment she and her friends have been exposed to.

Do you have a favorite scene in Stonecast?

So hard to choose!  I mean, I try to write only favorite scenes… but I suppose some are a bit more favorite than others.  There’s some areal combat that starts at Gramercy Park and ends up in Central Park after crashing through the Empire State Building.  And it involves more than gargoyles in flight.  I had a lot of fun with that.

Also, any scene I write with Bricksley in it always makes me snicker (Bricksley is a single-brick golem that serves Alexandra Belarus in her Spellmasonry). (Author note to UFI:  SEE PIC)

I am told that you will be donating $1 for every pre-order copy of Stonecast to the Worldbuilder's charity. Could you tell us a little bit more about that and why this charity caught your attention?
Sure.  Worldbuilders is the name of my arch-nemesis Patrick Rothfuss’ charity.  A lot of authors usually donate cool stuff or services to his charity, and in the end all the money goes to Heifer International.

In Pat’s words:
“Heifer helps people raise themselves up out of poverty and starvation. All over the world Heifer promotes education, sustainable agriculture, and local industry.

‘They don’t just keep kids from starving, they make it so families can take care of themselves. They give goats, sheep, and chickens to families so their children have milk to drink, warm clothes to wear, and eggs to eat.”

I like Heifer International, too.  What’s not to like? And I love how direct their effect is. Plus I feel all squishy inside.

In the past, I’ve offered read and critiques for their auctions, signed books… but the best way I raise money for it started last year with Alchemystic and I’ve continued it this year with Stonecast.

Thanks to my day job at Penguin, I can track my  preorders.  For every book preordered before September 24th, I throw in $1 of my own into the charity.  What’s great is that Penguin will then match the first $1,500 that I contribute, thereby doubling the amount give to Heifer.  People get a great gargoyle book and buy some baby chicks or a heifer!  Win-win.

Which character was your favorite to write about? What about the hardest to write about?
I really enjoy writing about Marshall Blackmoore.  Marsh is a bit of a D&D nerd, and he approaches the discovery of gargoyles and alchemy in modern day Manhattan with a special excitement.  His entire thought process in dealing with it revolves around gaming and nerd culture, which of course makes him close to my not-so-secret heart and probably my favorite.

The hardest to write for is probably Stanis, one of my two first person narrators in the series.  First of all, he’s a gargoyle from the 1800s, only now discovering a sense of self.  Most of my narrators in both my series have been contemporary people, so suddenly I have to write in this far more… stoic tone.  He doesn’t contract words.  He doesn’t understand or use idiomatic language.  It’s definitely challenging, but I love the strength and honor he brings to the tale.

I’m frantically working on book three in The Spellmason Chronicles.  I have a short featuring pole arm wielding dancer Rory Torres from the series going into an anthology next year.  I also have two other projects I’m hoping to put some time into:  what I call my young adult Dickensian Voltron Steampunk Iron Man novel, and a sekrit graphic novel idea I’ve been tinkering with that reminds me of both Fables and The Sandman series.

When not plotting against his mortal enemy Patrick Rothfuss, Anton Strout is the author of the Simon Canderous urban fantasy series for Ace Books including Dead To Me, Deader Still, Dead Matter and Dead Waters.
His new series with Ace Books is entitled The Spellmason Chronicles. Alchemystic is first in the series with the upcoming second book Stonecast due out on 9/24/12.

He is also the host and curator of content for The Once & Future Podcast, a weekly show that focuses on discussions with other working writers.

His other writing has appeared in a variety of anthologies—some of which include Simon Canderous tie-in stories—including: Boondocks Fantasy, The Dimension Next Door, A Girl’s Guide to Guns & Monsters, Pandora’s Closet, Spells of the City, and Zombie Raccoons & Killer Bunnies, Spells of the City, Boondocks Fantasy, After Hours: Tales from the Ur-Bar, and the upcoming Human For A Day .

He currently lives outside New York City in the haunted corn maze that is New Jersey (where nothing paranormal ever really happens, he assures you). In his scant spare time, he is an always writer, sometimes actor, sometimes musician, occasional RPGer, and the world’s most casual and controller-smashing video gamer. He also works in the exciting world of publishing, and yes, it is as glamorous as it sounds. 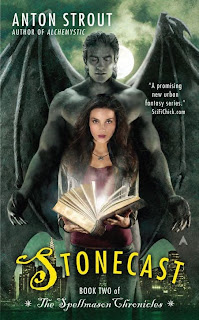 
The adventures of a girl and her gargoyle continue in the second installment of this “thrilling, funny and eerie” fantasy series. —Romantic Times on Alchemystic

Alexandra Belarus, the last practicing Spellmason, doesn’t know what has become of Stanis—her gargoyle protector. Hidden forces are watching her and threatening her, and, now, she’s worried for her stone-hearted friend—who may no longer be so friendly.. 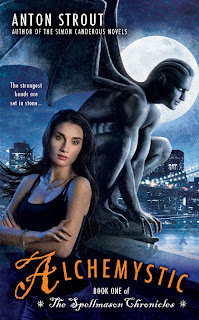 AN OLD FRIEND OF THE FAMILY…
Alexandra Belarus is a struggling artist living in New York City, even though her family is rich in real estate, including a towering Gothic Gramercy Park building built by her great-great-grandfather. But the truth of her bloodline is revealed when she is attacked on the street and saved by an inhumanly powerful winged figure. A figure who knows the Belarus name…

Lexi’s great-great-grandfather was a Spellmason—an artisan who could work magic on stone. But in his day, dark forces conspired against him and his, so he left a spell of protection on his family. Now that Lexi is in danger, the spell has awoken her ancestor’s most trusted and fearsome creation: a gargoyle named Stanis.

Lexi and Stanis are equally surprised to find themselves bound to each other. But as they learn to work together, they realize that only united can they save the city they both love…