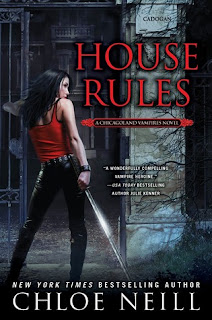 In a city full of vampires, trouble never sleeps.

At the tender age of 27, Merit became a sword-wielding vampire. Since then, she’s become the protector of her House, watched Chicago nearly burn to the ground, and seen her Master fall and rise. Now she’ll see her mettle—and her metal —tested like never before.

It started with two . . . Two rogues vanishing without a trace. Someone is targeting Chicago’s vampires, and anyone could be next. With their house in peril, Merit and her Master, the centuries old Ethan Sullivan, must race to stop the disappearances. But as they untangle a web of secret alliances and ancient evils, they realize their foe is more familiar, and more powerful, than they could have ever imagined.


While Cadagon house is busy deflecting from the Greenwich Presidium rogue vampires start showing up dead. As usual a very busy Merit is on the case. We have a great array of all of our favorite characters playing a role in HOUSE RULES. We also have some we don't quite care for like Lacey who is back for to provide support to Ethan while trying to get back into his bed. While dealing with everything else its also time for Merit to be officially Sworn into the Red Guard. Merit believes whole heartedly that it is the right thing to do but Ethan's feelings are in the back of her mind and she has a bit of trouble with that.  As usual we cant go one book without some sort of conflict between Ethan and Merit. Thankfully they are evolving and adapting and are able to work through things a bit better than before. They very much compliment each other and we see just how much with each book. I loved some of the thoughts Merit was having about their future which coincides with some of Gabriel's past remarks.

There are plenty of surprises, humor, and secrets revealed in HOUSE RULES that makes it another great addition to the Chicagoland Vampire series. It is a must read and the series remains one of my favorites. Book 8 BITING BAD is set to release in August thankfully so we don't have long to wait until the next installment.