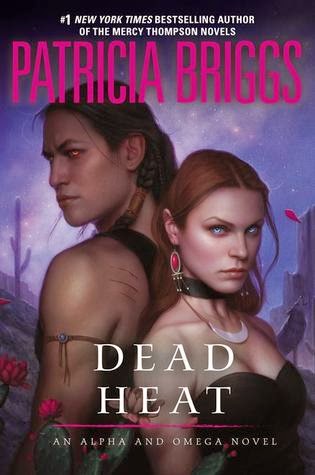 For once, mated werewolves Charles and Anna are not traveling because of Charles’s role as his father’s enforcer. This time, their trip to Arizona is purely personal, as Charles plans to buy Anna a horse for her birthday. Or at least it starts out that way...

Charles and Anna soon discover that a dangerous Fae being is on the loose, replacing human children with simulacrums. The Fae’s cold war with humanity is about to heat up—and Charles and Anna are in the cross fire.

I'm not sure why, but I didn't think we would be seeing Charles and Anna again in their own book, so DEAD HEAT was a nice surprise to receive for review. Anna and Charles head to Arizona to buy Anna her own horse. Things take a turn when family members of those they are visiting are attacked by the Fae. DEAD HEAT dives into Charles' past and introducing us to some of the very few humans he calls friends.

I loved watching Anna hold up against an old love of Charles that tried very hard to be rude to her and push her down. She really can hold her own and she has zero worries when it comes to Charles and her relationship. It was great watching Charles open up and interact with his old friend. We get to see a side of him that we don't often see and I think Anna was even a bit surprised and glad to be able to witness it. The relationship between the two is strong and it was great to see them working as a team.

There is plenty of action involved in DEAD HEAT. Charles has a bit of a hard time letting Anna help as he doesn't want her to get hurt, but I think she did a really good job of showing him she can take care of herself while also letting others know when she needs help. She really kicked butt. There is a lot of mystery involved in the case they are working. I didn't have a clue what was going on until they did. The plot moves at a fast pace and I really enjoyed every moment of it.

Whether you decide to start out reading the Alpha & Omega series or the Mercy Thompson series you should give Patricia Briggs a try. She is one of my top 10 favorite authors and I think you'll have no issues falling in love with her writing.