UFI welcomes Lisa Shearin Author of The Raine Benares series. Thanks for Joining us!!

I don’t have much downtime, but when I do, I love to read. Any spare moment I have, I grab a book. Right now I’m really into paranormal thrillers.

I absolutely love it when I’m “in the zone” and the characters, setting, and scene all come together and come to life. When that happens, I feel like I’m not the one in control, the characters are, and I’m just sitting in a corner writing down what they say and do as fast as I can. That’s when the magic happens.

I start each chapter writing longhand in a journal with one of my vintage fountain pens. And my official “writing chair” is a huge a 120-year-old mahogany rocking chair. My thoughts flow better from brain to pen to paper (while sitting in that chair). I think writing longhand gives me a more direct path to my inner storyteller. Once I’ve written a first draft, then I key it in to my computer and start expanding from there.

I loves me some Harry Dresden. In my opinion, Jim Butcher’s Dresden Files are danged near flawless. I also adore Rob Thurman’s Cal Leandros series. Dark, snarky, and mmm, mmm good. I also really have enjoyed Douglas Preston & Lincoln Child’s Agent Pendergast series. At the moment I’m reading NOCTURNAL by Scott Siegler, MONSTER HUNTER ALPHA by Larry Correia, and LEGEND by David Golemon. I generally have more than one book going at any given time and bounce back and forth between them depending on what I’m in the mood to read.

How would you pitch the Raine Benares series to someone who has not heard of it before?

Raine Benares is a seeker, which is basically a detective who uses magic to find missing people and stolen objects. At the beginning of the series (MAGIC LOST, TROUBLE FOUND) she inadvertently gets herself psychically bonded to the Saghred— a stone that gives the one bonded to it unlimited power, with a side order of insanity. Not crazy like an eccentric aunt, but take-over-the-world-and-kill-millions kind of crazy.

The entire series (all six books) takes place in an approximate three-month timeframe. That’s a lot of action in very little time, but thanks to the Saghred (and the evil megalomaniacs who want the stone for their own), Raine is in a lot of trouble with very little ways out of it.

Thanks to friends and allies (both old and new), and ill-timed romantic entanglements (it ain’t easy to fight for your life and have a relationship at the same time), Raine manages to stay one step ahead of the power-hungry elves and goblin aristocrats who want the stone and its power for their own. Unfortunately Raine can’t just give it to them. Once bonded to the Saghred, you’re bonded for life. Only death can break that bond. Yours. Understandably, Raine has a problem with that last part.

ALL SPELL BREAKS LOOSE is the finale of the Saghred storyline. In it, Raine and a small band of good friends, not-so-good friends, and one outright enemy (don’t ask), travel to the goblin capital of Regor in order to destroy the Saghred and kill the goblin archmage who has found a way to use the stone’s power to enslave the world. While there, Raine & Company must also renegade goblin prince on the throne. Piece of cake. Not.

I based the island city of Mermeia on Venice. It’s just so cool and gorgeous and mysterious. Hmmm, that sounds a lot like Tam, too, doesn’t it? ; ) I wanted to start the series with a location that readers could anchor themselves in, to make the book more easily visualized, and the action more real.

Do you have a favorite scene in All Spell Breaks Loose?

Oh jeez, there are so many little gems in there; I can’t just pick one. Besides, I wouldn’t want to ruin the fun for anyone who hasn’t read it yet. ; )

The most fun was my main villain, Sarad Nukpana. He’s just so gloriously, gleefully evil. How could you not have fun with that? His scenes with Raine virtually wrote themselves. I have to say that two of the most difficult to write were Mychael and Tam. What can I say? The way of a man’s mind is a mysterious thing.

All Spell Breaks Loose is the last book of the series. What book out of the six was your very favorite to write about? Hmm, that’s like trying to pick a favorite child; you love them all, but for different reasons. If I had to pick one, I would have to say BEWITCHED & BETRAYED, because a lot of relationship issues were resolved in that book.

I’ve just completed a proposal package for an urban fantasy/supernatural thriller/comedy series. You all know how I love to mix & match genres. I have the series premise written, as well as the synopses for the first three books, and I just finished the final sample chapter today (for a total of six). I promise that as soon as I get a contract for it, I’ll tell you more—in fact, you probably won’t be able to shut me up. I’m so excited about this project—it’s just pure fun.
__________________________________

Contrary to popular belief, most authors do have day jobs just like everyone else. I’m happily ensconced at an advertising agency as an editor and quality control manager. In my previous corporate life, I’ve been a magazine editor, advertising copywriter, and writer of corporate marketing materials of every description.

I’m the author of the national bestselling fantasy adventure series featuring Raine Benares, a finder of things lost and people missing. But what Raine finds best is trouble and lots of it. The series began with Magic Lost Trouble Found, and continued with Armed & Magical, The Trouble With Demons, Bewitched & Betrayed, Con & Conjure and All Spell Breaks Loose, which will hit bookstore shelves in 2012.

I’m a member of the Science Fiction & Fantasy Writers of America, and I live in North Carolina with my always patient and ever-encouraging husband, two spoiled-rotten retired racing greyhounds and a Jack Russell terrier who rules us all.
__________________________________ 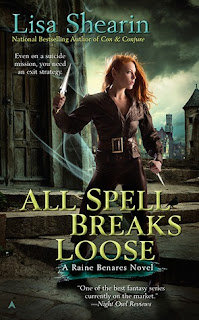 
My name is Raine Benares—and it sucks to be me. The Saghred, a soul-stealing stone that has given me unlimited power, has been stolen by a goblin prince, and with it went my magic. The Saghred is in the goblin capital of Regor, in the hands of Sarad Nukpana, who’s on the verge of becoming the most powerful mage ever...just as soon as I’m dead.

Because Sarad can’t use the stone while I’m alive. Incentive enough to plan a little trip to Regor with a small band of good friends, not-so-good friends, and outright enemies. All we need to do is destroy the Saghred, kill Sarad, and put a renegade prince on the throne. Did I mention I’ll be doing this without magic?