Thank you to everyone that entered!!
PRIZE: Tote bag filled with Swag

The winner chosen by Rafflecopter is…
Read more »
Posted by StacyUFI at 9:55 PM No comments:

Early Review: Magic on the Line by Devon Monk 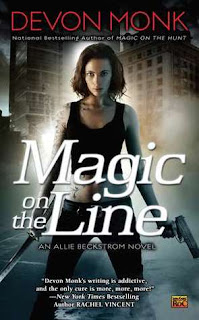 
Allison Beckstrom has willingly paid the price of pain to use magic, and has obeyed the rules of the Authority, the clandestine organization that makes-and enforces-all magic policy. But when the Authority's new boss, Bartholomew Wray, refuses to believe that the sudden rash of deaths in Portland might be caused by magic, Allie must choose to follow the Authority's rules, or turn against the very people for whom she's risked her life.

To stop the plague of dark magic spreading through the city, all that she values will be on the line: her magic, her memories, her life. Now, as dead magic users rise to feed upon the innocent and the people closest to her begin to fall, Allie is about to run out of options.

If you have not read the first 6 books I think you would be a bit lost trying to start at book 7 MAGIC ON THE LINE. There is a lot of back story that you would have missed and needed to follow along with everything. The Allie Beckstrom series is fantastic though so you wouldn't be disappointed in starting it. All the books up to date have been fast paced, full of action, adventure and interesting story line's to keep you coming back for more.

As always I really enjoyed MAGIC ON THE LINE. It was a great continuation of the series. So much has happened to Allie in such a short time and things really kick up another notch by the end of the book. Zayvion and Allie continue to fit well together. There is a point in the book that he goes completely against what he has always said and stands beside Allie and his friends. I cant get enough of Allie's friends specifically Shame and Terric. Shame although in a funk continues to be someone that is always there when he is needed. Terric always surprises me with what he will put up with and his loyalty. Allie's father being in her head is kinda starting to grow on me. I still don't like him but he sure ends up helping out a lot in moments of need. I'm still really upset with the fact that Allie doesn't have her personal magic. I don't know why it gets to me so much but its a constant thought with me and I really want her to get it back. The book ends with Allie and her closest friends being in a pretty bad position. There is a lot to do to get there lives back and I'm going to be along for the new ride.