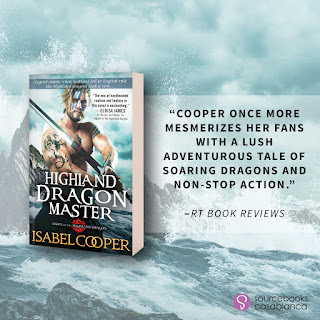 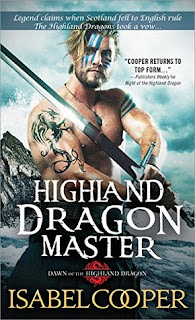 Legend claims
When Scotland fell to English rule
The Highland dragons took a vow:
Freedom at any price.

The war for Scottish independence rages on, but it's only a matter of time before England is victorious. Exhausted and battle-weary, Highland dragon Erik MacAlasdair will face unknown seas to seek the Templar stronghold and claim a power so great it could free his beloved homeland forever.

If only that kind of power didn't come with such a terrible price.

Daughter of a mortal woman and an ancient dragon, Toinette has never forgotten the proud Scot who once stole her young heart—she'll gladly fight at his side. But when dark forces leave them stranded on a cursed island, it will take everything they have to defy their fate...and trust the passion that burns within the heart of every dragon.


“How long has he been with you?” Erik asked as Marcus strode away over the deck.
Toinette hesitated a moment, searching his voice for prying or possessiveness, the sort of quality that would demand a sharp answer. She heard none, only a friendly question. It was a pleasant surprise from a man. “With me alone, these ten years. He sailed with my husband for five years before he died.”
“And he thinks you’re…”
“An adventurous young woman who married an older man. Hardly a creature of myth. He also doesn’t ask inconvenient questions.”
“A good quality in a companion.”
“That it is.” Toinette clasped her hands at the small of her back, lacing her fingers together, and stretched. The surrendering crack of her spine felt good. So did Erik’s eyes on her outthrust breasts.
She’d never been able to be very dishonest with herself. As a boy, Erik had been handsome in a gawky kind of way. He’d grown into himself in the last century, into a long nose and a square jaw, arms that rippled with muscle and thighs that filled his hose nicely. Jaded as Toinette was, she couldn’t stand near him and not feel desire ripple through her.
After Jehan’s death, she’d never taken lovers on board the Hawk, be they crew or customer. Men were too unpredictable, too apt to resent each other’s access to any woman’s bed or to think that their presence there gave them authority. Erik was possibly less dangerous in the second case, but the crew were no less prone to the first.
“What sort of birds are those?” Erik asked, sensing and then breaking the silence before it could become too awkward.
Toinette looked up and out. She spotted white wings, black heads, and a profile she knew well. “Terns. They’ll follow us for a little while, but they don’t go very far from land. Once we get further out into the ocean, we might see porpoises.”
“Do you catch them?”
“No. The men think it’s bad luck. For all I know, they might be right. No sense tempting fate on a voyage like this, is there?”
“Not in the least.” Erik grinned. “I’ve a fair idea of how daft the whole venture makes me sound.”
Toinette glanced back from the water to meet his eyes. “Do you think it’s daft?”
“I don’t know,” he said. “Artair doesn’t, and it’s seldom that he’s far wrong.”
“I’ll take that as a compliment too.”
“You’re very quick to seize those.”
Toinette shrugged. “I’ve an eye for a good thing, and I’ll take what I can get.” She turned back to the waves, watching them rise and fall. White foam broke around the Hawk’s prow, and the boat rocked steadily onward. She could feel the wind as if she were the sail herself.
“Almost as good as flying, in its way,” said Erik.
“Oh,” Toinette laughed, “better to my mind. Much of the time, anyway.”
“Truly?” Perhaps remembering how quickly she’d taken to the air at Loch Arach, Erik sounded completely surprised.
“Mm-hmm.” Toinette turned around again, facing into the wind and taking a deep, salt-scented breath. “Flying, you’re above everything. You see it from a distance. It’s you and the stars and the clouds. The birds if you’re staying low enough. Don’t mistake me, there’s a glorious sort of freedom in all of that.”
“But…”
“But on the sea, you’re a part of things. You smell the air, you see the way the water changes from place to place, the difference in what you catch for dinner or the whales in the distance. You get to know the ship too.” She smiled. “I wager I could tell the Hawk beneath my feet even if I were blind. It’s a place to come back to, a thing you make and maintain—and I’d say that’s the mark of souled creatures, though I’m no priest. Craft.”
“Earth and water, not air,” Erik said thoughtfully.
“And not fire, God willing. Rather the opposite of your line.”
“Yours too—or rather your blood,” he amended the statement quickly.
“Ah, well, perhaps it’s the mortal in me. Drawn to what will outlast short-lived men and so forth.” Toinette waved a hand in the air.
“That could be on both counts,” said Erik, looking out to the water. The wind played with his golden hair. He had less to disturb than Toinette did, yet it still ruffled in the breeze, and strands clung to his neck. “The Norsemen carve dragons’ heads on their boats, you know.”
“They might just want to frighten their enemies.”
“We are often things to be feared,” Erik agreed, and his smile was devilish.
Toinette returned it. “Some of us more than others,” she said, “and perhaps for different reasons. Depending on who it is we’re frightening, of course.”
For just a moment, before she went to check on Marcus, she let Erik see the veiled challenge in her eyes.
It would be a long voyage. With no privacy, there was also no danger that either of them would get carried away. And few people were more qualified than Toinette to play with fire. 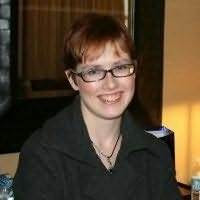 Isabel Cooper lives in Boston, Massachusetts with her boyfriend and a houseplant she's managed to keep alive for over a year now—a personal best. By day, she's a mild-mannered editor at a legal publishing company. By night, she's really quite a geek: polyhedral dice, video games, and everything. She only travels through time the normal direction, and has never fought any kind of demon, unless you count younger sisters. She can waltz, though.