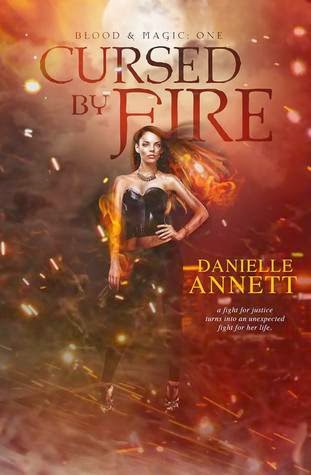 It has been six years since the Awakening and peace in Spokane, Washington is still tenuous at best. The vampires and shifters are all vying for control of the city and the humans seem to be the ones suffering the consequences, or so it seems.

Aria Naveed has spent the last two years of her life fighting to make the many wrongs of the world right, but soon finds out that the humans aren’t as weak as they appear and may be a more terrifying foe than any of the other races combined.

When a stranger rolls into town with trouble on his heels, Aria finds herself trapped in the middle of a battle that could cost her more than she has bargained for as a fight for justice turns into an unexpected fight for her life.


I want to start out my review by talking about other reviews saying that CURSED BY FIRE is basically a rip-off of the Kate Daniel Series and Psy/Changeling Series. I have not read the Psy/Changeling series so I can not say if this book is similar in any way, but I have read the Kate Daniels series. Although I won't go into every single detail that are alike (because others have already done that), I have to agree that there are quite a few things in CURSED BY FIRE that have the same feel as the Kate Daniels books/experiences and that makes it hard to write this review.....sigh.

SO, if I had never read the Kate Daniels series I would tell you that I enjoyed the characters, world and plot line of CURSED BY FIRE. I would have told you that I wish it was longer because I didn't feel like we got enough in the 157 pages and I would have loved some more detail. I would have said that the story flowed well and I liked the twists and turns that were thrown at us when we learned about the group that was trying to recruit Ari. I would have said I was extremely disgusted by the Alpha's proclamation at the end and how I hope that Ari finds out quickly and makes him pay for his scheming where she is concerned. Having said all of that, I don't think it really matters what I thought because of the fact that I have read the Kate Daniels series and there are just too many similarities. Because of this I have decided I will NOT be giving my review a star rating.