UFI welcomes Author Shari Nichols. Thanks for Joining us!!

Hello, my name is Shari Nichols and I write paranormal romance. I’m here to talk a little about my new release HAUNTED... So sit back and relax. I hope this is fun! I’d love to give you some fun facts that served as inspiration for the story.


Pretty creepy, right? Have you ever experienced a spirit in your presence or taken a ghost tour? Do you believe in the supernatural? What’s your experience?  Here’s a picture of the bar area where the three people died. 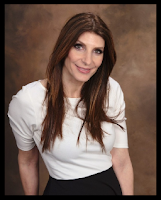 Shari Nichols grew up in a small town in Connecticut where haunted houses, ghosts and Ouija boards were common place, spurring her fascination with all things paranormal. Ever since she read her first Barbara Cartland novel, her life-long dream has been to write sexy, romantic stories. Shari has been married to her own alpha hero for twenty-five years. When she’s not writing, she’s reading, going to the gym, or hanging out with family and friends.

She lives in New Jersey with her husband, two teenagers, and her adoring golden retriever. She’s thrilled to spend her days in sweats, eating chocolate while pounding on her keyboard to create her next novel. Shari’s a member of Romance Writers of America, New Jersey Romance Writers, Liberty States Fiction Writers and Fantasy, Futuristic, and Paranormal Romance Writers. 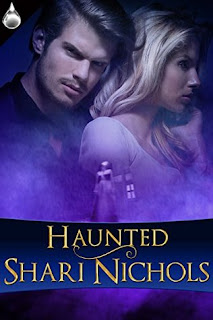 When medium Karly Matthews agrees to move into a haunted inn, she’s not sure what’s more dangerous, the ghost or the sexy innkeeper she tries to resist. She’s can’t deny the intense rush of desire she feels every time he’s near. When she agrees to embark on a no-strings-attached relationship, she finds herself thrust into a world of mind blowing pleasures. Now she must face the aching truths of her past.

Hotel heir Thayne Harper has a laser-like focus on success that doesn’t include the help of his family. He’s always been the black sheep, living in the shadow of his dead brother. His dreams are put to the test when a supernatural entity threatens to ruin everything. The one bright spot is the woman who intrigues his mind and heats his blood.

If only he can convince her that, despite his bad boy ways, he can change for the good. Her love becomes his only salvation. Passion burns white-hot as a dark threat looms. The ghost doesn’t want them to be together and sets her sights on Thayne, luring him to a place that goes beyond death. Will Karly be able to save him before it’s too late?

Karly made sure to keep her head down, wanting to avoid another run-in. Her gaze skittered over fallen leaves and flagstone tiles. Through the corner of her eye, she spotted a man in a suit and a few servers. Her fingers tightened around her key chain with every step, wanting to be far from the chaos of the evening.
She was almost to the main street, when she bumped into a solid wall of muscle that threatened to knock her on her ass. Her keys flew from her hands as she began to fall backward. Before she hit the ground, two strong hands reached out and caught her around the waist. She glanced up and into the gorgeous face of the god she’d seen earlier.
Up close, he was even more stunning and taller than she’d calculated. He exuded strength and masculinity, and when he focused that intense magnetism on her, all the air left her lungs, along with her ability to speak.
Genuine concern flashed in his whiskey colored eyes. “I’m sorry. Are you okay?” His voice was like warm chocolate, melting her insides. When he dropped his hands, Karly could still feel the imprints on her skin.
“Y-yes, I’m fine. I’m the one who should be apologizing. I wasn’t paying attention to where I was going.” Her heart pounded wildly in her chest. The man smelled incredible, like sandalwood and clean laundry.
“No need for apologies. Maybe you should sit down for a minute and have a drink with me.” There was elegance in the way he spoke that made her think of old money and private school.
For a moment Karly thought about taking him up on his offer, but she wasn’t in the frame of mind to pull off light conversation or flirty banter at this point. “Thanks, but I have to pass. This night, well, it didn’t turn out the way I’d hoped so I think it’s my cue to go.” She did her best to school her features, but inside she was feeling raw and vulnerable. The only thing she wanted to do was go home, soak in a hot bath, and lick her wounds.
His searing gaze swept over her and made butterflies flutter in her stomach “Perhaps I can make it better. Stay and have a drink with me.”
Karly glanced at his jacket for his nametag, but like her, he wasn’t wearing one. “I’m guessing you’re in either sales or politics, and if this is all for a campaign donation, I’m sorry, I already gave at the office.” Immediately she got a vibe telling her he was his own boss, which wasn’t hard to figure out. The man exuded confidence and power.
The throaty sound of his laughter raised goose bumps on her flesh. “So you’re funny and beautiful that’s quite a rare combo, Miss….?”
His words slid over her like a warm caress. A flush spread across her cheeks. She shook her head, a little dazed by the compliment. It would be hard not to succumb to his charms. If she was honest, his scent alone was driving her crazy. No, the man spelled danger. “I’m sorry. I should go. Good night and uh, nice running into you.” She sucked in a breath, turned and took a step toward the street.
“I don’t think you’ll get far without these,” he said in a bone-melting voice that forced her to turn around. He held up her keys in his hand.
“Right. Thanks.” She’d become so dazzled by his looks, she’d completely forgotten about them flying out of her hands
“My pleasure.” The way he said the word pleasure conjured images of their bodies tangled together, rolling around in satin sheets. The air sizzled with sexual tension. Slowly, he closed the distance between them and placed the keys in her hands. She purposely avoided touching him, but his fingers grazed hers, sending a spark of awareness up and down her arm.
“Don’t go,” he whispered.
“Why?” Karly was curious to hear what he’d say next.
“I can’t let you disappear into the night without telling me your name.” The words were spoken in a commanding tone that normally would've irritated her, but for some reason when he said them they hit every one of her buttons. “You can give me that much can’t you? It’s not every day I meet someone that captivates me and you have, quite thoroughly I might add.”
The scorching heat in his gaze made her shiver. She swallowed and tried to regain her equilibrium. It’d been a long time since a man had looked at her with such blatant desire. “I’m impressed— that’s quite a pick-up line. I’m curious, does it usually work?”
His smile was pure sin. “I’m not using a line on you. I just want the chance to talk to you. Give me five minutes, that’s all I ask.”
What happens after that?” His charisma began to melt her resolve. Karly stole a glance at his clothing. His sweater looked like cashmere and his suit jacket was perfectly tailored and cut to fit his body, only adding to his commanding presence.
“You decide. If you want to continue the conversation, I get your number, if not, then we part ways. No harm done.”
How could she say no when his approach was so refreshing “Nothing like cutting to the chase.” A guy that looked like him probably had women falling all over themselves to get his attention. It didn’t take a psychic to glean the man was a player. He was too smooth to be anything else. “Five minutes is all you get.”
“Five minutes is all I need.” He was persuasive, not to mention cocky as hell and yet for some reason she couldn’t seem to say no where he was concerned. Besides, his vibe was positive and cool with no warning signs.
“You’re pretty sure of yourself. Do you always get what you want?”